An early start on Sunday morning, driven by the need for low tide. We return to Narooma Beach, in search of pillow lava. We go armed with a photo from the website about the Narooma Accretionary Complex, a quick look at Google pillow lava images, and a determination to track it down. The day is splendid, and the rock lilies are flowering on the Two Sisters just off the highway. We poke around the beach, creating hypotheses and asking endless questions of each other's ignorance: “What do you reckon?” ” Is this it?” and noticing all sorts of other rocky things, that raise more questions. Finally we decide that we have it nailed. 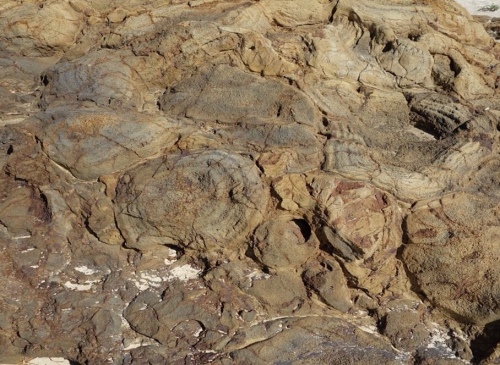 What's the story of pillow lava? Mounds of elongated lava “pillows” form as hot basalt oozes thousands of feet below the ocean and is cooled quickly by sea water. A glassy crust forms over the lava, pressure builds up, the crust breaks, and new basalt extrudes like toothpaste, forming another pillow. So the land we were walking along, with the sea curling lazily in, was once far under water.

It's T-shirt warm, and we continue exploring, clambering around the rocks below the cemetery, me deigning to use J's supporting hand once or twice. I learn again that taking cautious steps causes more wobble than maintaining forward momentum.

Baranguba on the horizon, the tide on the turn, daisies spilling down the cliff, the waves rolling in, we look up at ancient sea floor rising black above us. We are in a subduction zone, where once upon a time a Pacific plate caused upheaval when it thrust itself under the edge of the Gondwana plate, so geologists say. Here we think we see more pillow lava on the rock platform. 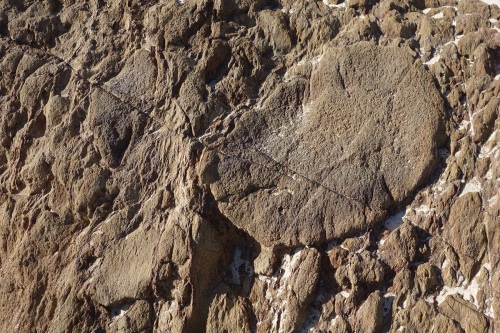 A reminder of our First Peoples appears on the rocks below the cliff, a small painting, confidently executed.

17 thoughts on “Hunting for pillow lava”