As I write this, the twins and their parents are in the air returning to Warsaw and a flu epidemic: “I hope it's the flu we had when we left”, says my daughter. Their visit was all too brief, only five days at Potato Point.

But what rich days! Maja and Jaś are three and two months now, full of energy and play and a continual flow of words in two languages. This visit they love the sand and the sea, and the beach reciprocates by offering calm blueness, warm water and low tide for our morning jaunts. They are quite willing to hold our hands and walk down to the beach, past kangaroos, across a rattly bridge where they see fish, and along the edge of the creek. They dig holes down to the water; help dziadek and tata build droozle castles; mould perfect sand fish, crabs, ducks, aeroplanes and bucket-castles which they immediately and gleefully stomp on. One day dziadek finds them a big crab in a crevice and they are sure-footed on the rocks as they peer in at it peering out at them.

At home Maja runs her own bath and refuses hot water. They play games in a laundry hamper: they are lizards and emerge from the hamper saying “Pop”, with a handful of lizard eggs. They build with blocks their mother played with, off cuts of a dolls house built by her Tata. They listen to stories which all seem to feature farting. They go downstairs to the “cellar” where their uncle plays his guitar for them and finds the one his father bought as a 16 year old. One day, when mum and dad leave them, we extinguish anguish by letting them take turns with uncle's can-crusher. They've been at pre-school since October and they take turns beautifully.

They already understand the need for the indefinite article in English (non-existent in Polish) but prefer “an” to “a”: “I want an banana”. They have a bit of Aussie in them: “I not gunna” is a common assertion. Often they preface statements with “Maybe …” When I call a seagull a pigeon, Maja says “Not a pigeon. Pigeons are colour.”

There are moments of drama. Over the breakfast cornflakes, “I want a pink plate” has me racking my brains until I remember my precious hand painted Wedgewood, mainly pale yellow but with very special pink centres to the flowers. The need for a yellow duck in the bath is harder. Tata draws one with a yellow texta, but that's not good enough. I produce a sparkler and peace reigns. Purchasing a whole watermelon poses unforseen problems: “Not a green one. Want a red one.” The dramas seem to be associated with fatigue and colour preferences.

Uncle is a great resource. Not only does he play guitar. He has a dog, and he lets them “hold the handle” when we go for a walk. Jaś takes his job seriously and doesn't let go when Cruz breaks into a gallop, resulting in a face plant on the grass. On the last afternoon uncle produces bubble mix and hyperventilates as he blows bubbles on the front deck.

Now they've gone. Fortunately, in four weeks we go too. If we didn't already have our tickets, I think we'd be buying them now.

Maja daring the ocean with dziadek

Jaś in search of water

Playing in the creek 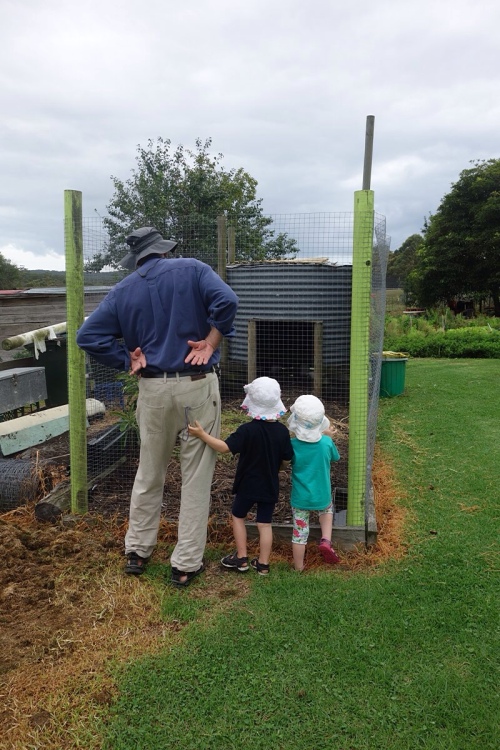 Shining torches on my backyard