1080 is a poison, banned in many countries but still used in Australia in an attempt to eradicate foxes, rabbits and wild dogs. Edward Hoagland calls it “a drastic potion”. How come it is also the name of a beach in the Eurobodalla National Park, and a very beautiful beach at that? When we first moved to this part of the world, surfies J knew kept talking about this great beach called 1080. It was one of those nameless beaches around here that surfies identified using the name of the poison on warning signs. The name stuck.

We drive through bushland from Mystery Bay, the sign for 1080 invisible from the road, a familiar habit of National Parks and Wildlife NSW. The bushland opens out into a clearing on the headland, a scattering of picnic tables and short tracks leading to the edge of the cliff. There are long views south to Mumbulla Mountain and an emphatic sea empty of surfers. A wooden staircase leads down to the beach, and to the rocks that are of course the focus of our interest.

As with most of our weekend beaches we’re in sole possession as we move amongst the rocks, expecting to see something similar to rocks we’ve seen before. Not so. How to characterise these rocks?

There are rocks in conjoined piles crowned by grass and sky; rocks displaying panels, parallel and differentiated in shades of brown and pumpkin and grey; and rocks sporting a blue line meandering past minute shelves where sand has settled.

There are clean-edged black basalt rocks stretching out into the turmoil of surf. They’re johnny-come-latelies on this coast, only 99 million years old and related in origin to the rocks of nearby Gulaga Mountain and the offshore island, Baranguba.

I’m delighted to spot a geological feature I recognise, a substantial dyke intruding into 470 million year old sandstone, if I’m to believe the results of a search.

Perhaps the most distinctive feature of this rocky profusion are the wavy lines, unlike anything we’ve seen before.

Unfamiliar too are the frilled vertical layers, from some angles looking like old-fashioned bonnets.

I wander round contentedly as the tide begins to drop, relishing textures and patterns and colours; tiny pebbly coves gentled by crystomint wavelets; rocks vivid with orange lichen; and the view back to Mumbulla Mountain. A lowering sky does not, sadly, deliver on what looks like a promise of rain. 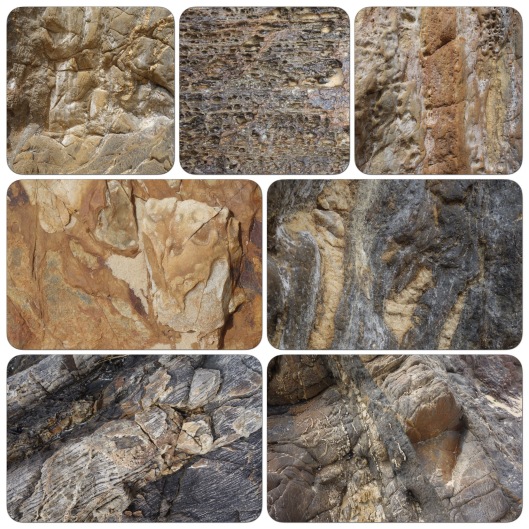 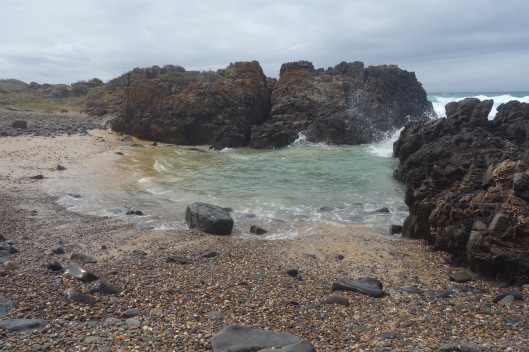