On Saturday morning J is going to an alternative energy expo – not something I want to share – so after I deposit him, I meander off without much of a plan. Idly, I turn off the coast road between Kianga and Dalmeny and experience the now- familiar weekend astonishment as I crest a hill and see an unfamiliar rocky coastline spread out ahead of me. A turnoff I must have passed hundreds of times, mind you, and a rocky coastline about 20 kilometres from home. I love the way these pleasures have been lying in wait for my declining years. At least that’s when I’m not thinking “What the heck have I been doing all my life?”

The road is flanked by alcoves mowed and spangled with dandelions and blue star-shaped flowers with minute maroon berries. Close behind the beach are houses, and the cliff-edge has been landscaped: grasses, trees, mint bushes, spectacular purple berries, and in wilder places, escapee red hot pokers. 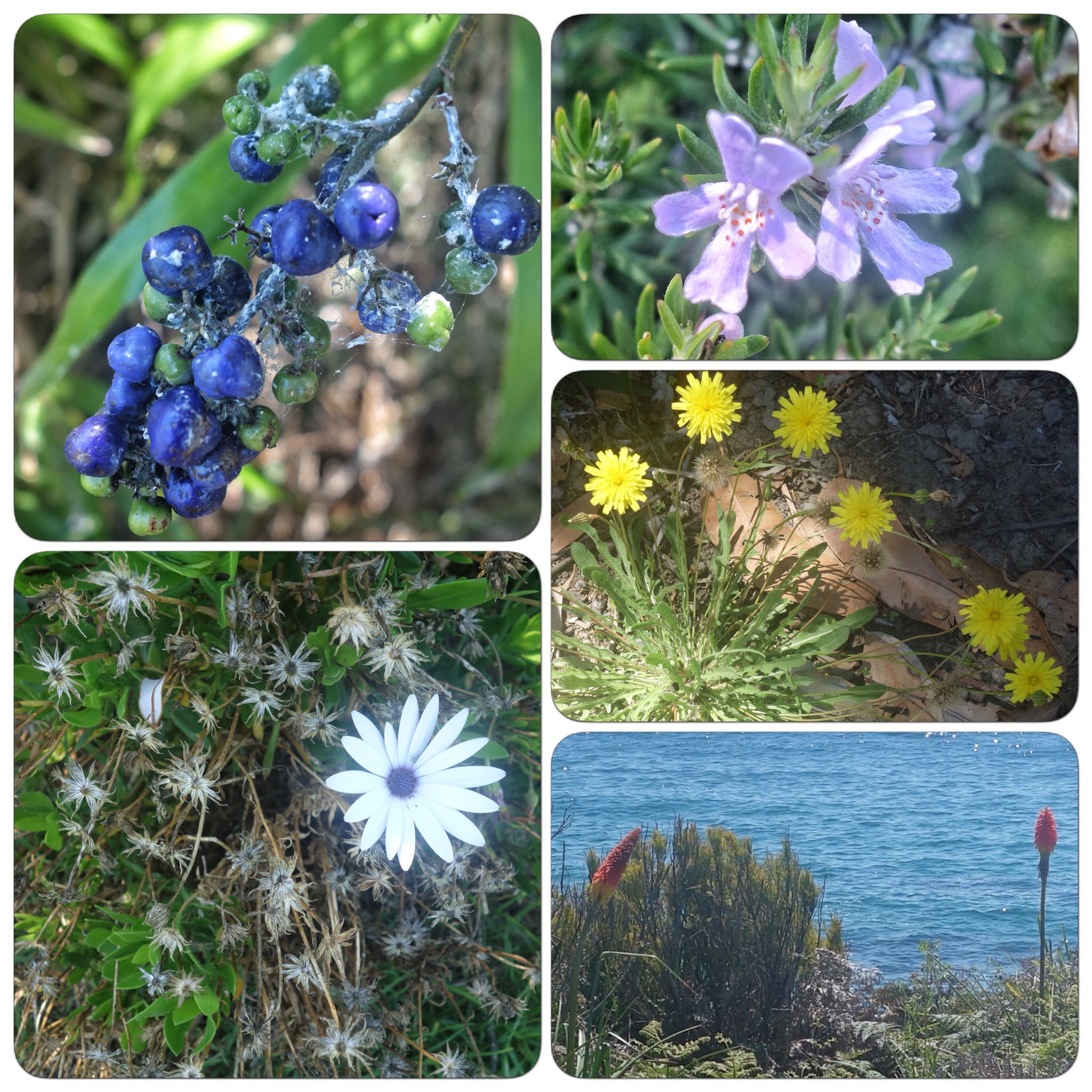 I park the car in a dead-end street, and stride along the cycleway, passing a wooden staircase down to the beach, and side-stepping a pavement penguin with green-pebble eyes. My green-jelly eyes gobble up great chunks of rocky coastline, and the blue blue sea scintillating with sun-drops. Waves break and the foam recedes, captured by a current that sometimes carries it, an untidy white ribbon, from headland to headland. I’m not the only one who relishes the view: a sign warns that there is an $110000 fine for removing, lopping or poisoning trees between the house line and the cliff edge.

I pause at a lookout and read two information panels. One acknowledges the long presence of Aborginal people feasting on shellfish for thousands of years and leaving behind gigantic middens. The other one offers an armada of coastal steamers, linking the south coast with Sydney: passengers and supplies this way; passengers, butter, cheese and timber on the return journey.

I walk on past banksias to the point where I can see the coastline stretching south before I turn back. Joggers overtake – thud, thud, thud – usually in pairs: a cyclist pauses at a bench and indulges in arcane exercises; a family group approaches keeping slow pace with grandma on a walking frame; I murmur “G’day” to a couple wheeling a pram.

I go down the wooden staircase onto the beach. A small boy up to his ankles in the sea, shouts at the waves, and two family groups lounge on the beach. I head to the rock platform to the north as the day heats up.

When it gets too hot, I return to the shade in one of the grassy alcoves, and begin writing this post en plain air. Then the summons to collect J. I bring him back here for a picnic lunch (dips, triple Brie, sardines, and corn thins), supervised by a couple of splendidly disrobing spotted gums.

Why is it called Josh’s Beach? A schoolteacher at Narooma Central School in the 1960s lived in Ocean Parade and his surfie students used to call it Josh’s beach after him. We name our beaches strangely here: after poisons (1080) and now after a school teacher. The name became official recently, and caused a heap of controversy. Other locals have called it many things over the years: Rocky Beach, Back Beach, Little Beach, Our Beach. Somehow, after a visit from the Central Mapping Authority, who talked to an ex-councillor, Josh’s Beach became its official name. It’s also known as the beach with nomadic sand – sometimes there’s sand and sometimes there isn’t.