As I read books like Meadowlands, I long to read something Australian that shows such love of one particular place, such knowledge of its history, such acquaintance with its birds, insects, animals and plants. In A million wild acres: 200 years of man and an Australian forest by Eric Rolls, a work of monumental local knowledge and research completed in 1981, I find such a book.

I’ve known about it for years, but it kept on sliding off my to-read list. Having recently walked briefly in the Pilliga, the Australian forest of the title, I reckon its time has come. I borrow it from the local library, and halfway through, when I get to the chapter on plants, I know I have to own it.

It gives me an entirely new perspective of the spread of settlement from Sydney, spearheaded by cattle and ratbags, of whom Australian history has many. The outline of early history absorbed at primary school and only a bit refined since then is fleshed out as he peoples the Pilliga with early white arrivals – some wealthy expanders, some men and women hoping to make a go of it with slim resources. There are convicts serving time and convicts who have served their time; timbergetters and sleeper cutters; opportunists and hard workers; thieves and, very occasionally, honest men.

The early chapters are a bit jerky as he presents one-paragraph cameos of too many people. It’s when he gets within living memory that he really grabs my interest as he profiles people like Ned Edwards and Billy Reed, and outlines in detail technologies of the past: timber felling, shale oil lamps, the making of bullock bells, the breeding of cattle dogs, using spotted gum for coach spokes, how bullock teams worked.

Once he begins writing about his own observations of wasps and butterflies, I’m riveted. It doesn’t hurt that he’s a poet as well as a close observer.

The main presence lacking is that of the Aboriginal people. Massacres are mentioned casually, and a whole chapter is devoted to the murderous rampage of Jimmy Governor. This lack of balance is the only thing that irritates me.

The first wife: a story of polygamy by Pauline Chiziane

This book came to me through a post on The year of reading the world blog, which began when the blogger committed to reading a book from every country in the world in a year. It has taken me a long time to read this one, partly because I couldn’t quite get a handle on where it was going. That’s what happens when you read outside your culture. However the world of Rami and her four co-wives gradually draws me in as they take on the male culture of Mozambique, and I’m increasingly delighted as they support each other: starting businesses and challenging the husband’s behaviour in ways that make it read like a feminist text. Tony, like many men, never understands that his days of entitlement are over. The novel explores the roles of men and women and the many contradictions and manifestations of love in a way that make its particularities universal.

From the edge by Mark McKenna

A radio national program introduced me to this book of Australian-history-with-a-difference, three strands woven together: first contact with Aboriginal people; colonial appropriation of Aboriginal land and the enterprises of trading, farming, gold mining, pearling; and McKenna’s own visits to the places he writes about. He has chosen four sites: the first particularly engaging to me as he tells the story of a 1798 shipwreck and the trek of survivors up the east coast through territory I know well, leaving weakened Lascars behind in Moruya, one of my shopping towns. First encounters in this story are benign, as the local tribesmen help with food, river crossings and pathways, many times making the difference between life and death. Despite the immense help given by the locals, the official report to England somehow twists this into “the savage barbarity of the natives” and is only one of an expanding litany of misunderstandings. McKenna retraces most of this walk with his own feet – that’s the kind of historian I admire.

He explores three other histories on the edge of the continent. At Port Essington, near Darwin, an attempt to establish a settlement doesn’t last long. Hurricanes, disease, and the difficulty of life in the tropics is too much for representatives of the British empire and that settlement is abandoned, leaving a legacy of introduced cattle, pigs, buffalo and wild dogs. In the Pilbara, one of the oldest parts of Australia with well-preserved fragments of continental crust and ancient galleries of rock art, there was indiscriminate killing of indigenous people and forced labour on the pearling luggers – “dark deeds in a sunny land” indeed. Dark deeds continue as mining rides roughshod over an ancient culture and the Federal court extinguishes native title rights over the Dampier Peninsula.

By now, I’m completely sickened by the detail of dispossession, but of course there’s more to come as McKennna exposes the history of Cooktown where Cook repaired the Endeavour. He began the long history of conflict by poaching turtles with no understanding of protocols and provoked grass fire attacks on his camp in retaliation. In the 1870s the Palmer goldrush ripped apart the 30000 year old culture and heralded a relentless war of extermination for twenty years. When mining ended pastoralists moved in and continued the policy of wiping out the Guugu Yimithirr: seven remote rock art sites show European and native police on horseback brandishing rifles.

It’s a grim history, but one we have to acknowledge. Books such as this – and its sequel, which I’m eager to read – are the beginning of acknowledgement. 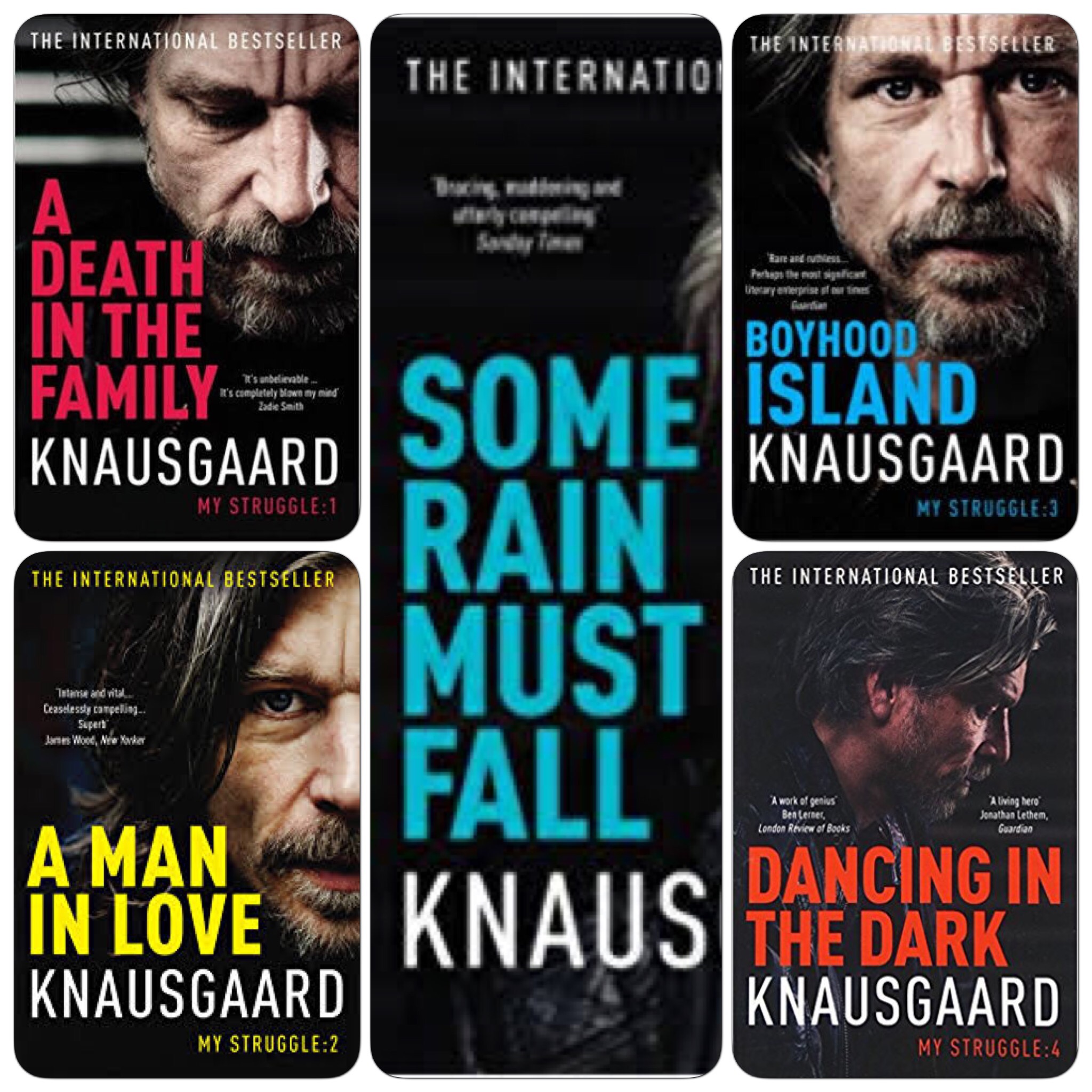 My struggle by Karl Ove Knausgaard

This is another book that has been sitting unread on my Kindle for about a year. What I’d seen of it in reviews both attracted me and turned me off. Once I began reading I was hooked, and paraded through the five volumes without a break, regretful when I finally reached the end. I’d been offered a minutely detailed account of a man’s life, an exhaustive and painfully honest diary: the whole gamut of family relationships, sexual dilemmas, self image, and obsession with music, as he experienced childhood, boyhood, teaching in a remote community, love affairs, marriage, children. He sums up: A life is simple to understand, the elements that determine it are few. In mine there were two. My father and the fact that I had never belonged anywhere.

These threads run through all volumes: his alcoholic father and the damage he’s done; Knausgaard’s (the persona’s?) savagely low self-image (The flame of stupidity burnt bright inside me. Oh such an idiot I was. What a stupid idiotic bloody idiot… my mouth shapeless, my thoughts, shapeless, my feelings, shapeless); his determination to become a writer and all the setbacks he encounters (And writing, what else was it but death? Letters, what else were they but bones in a cemetery?); his sexual dilemmas and adventures and his own drinking (three volumes of it!) (Instead I opened a new subdivision in my life. ‘Booze and hopes of fornication’ it was called and it was right next to ‘insight and sincerity’).

His writing credo he summarised thus: The idea was to get as close as possible to my life. You can spend twenty pages describing a trip to the loo and hold your readers spellbound. And blow me down, he did – at least this reader. I’m awaiting the verdict of my two daughters.

Here’s a taste of what kept me reading:

Everything was packed in thick white cushions of snow, apart from the sea, which with its dark clean surface and terrible depths lay nearby like an alien and menacing presence.

The sky was as grey as dry cement

My brother tricked me into thinking that exhaust pipe and carburettor were the filthiest words in existence.

What you see every day is what you never see.

(Reading the two evening papers) was like emptying a bag of rubbish over your head.

What would it have been like to live in a world where everything was made from the power of your hands, the wind or the water?

The world is full of inner cripples bumping into each other.

And, predominantly, his self-excoriation, which should drive a reader nuts, but somehow doesn’t

Dad’s dead, I thought, this is a big, big event, it should fill me to the hilt, but it isn’t doing that for here I am staring at the kettle.

Had I ever initiated a conversation with a stranger? No, never. And there was no evidence that I ever would.

For Christ’s sake, being a good person, was that beyond me?

She said I couldn’t see other people. I was completely blind. I saw only myself everywhere.

I knew it would be more difficult to show a midwife the door than to be stabbed with a knife in the Metro. 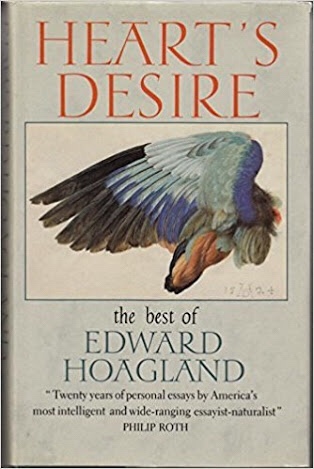 In pursuit of better writing I read Phillip Lopate’s To show and to tell: the craft of literary non-fiction. This led me to a consummate writer, Edward Hoagland, who was my first-coffee companion for a couple of months. He’s a writer to savour, not guzzle. I was very sad to finish this book of amazingly diverse essays, written with panache, honesty and humour. What pleasures did he give me? An immense treasury of apt words, often in unexpected and vivid collocations. His ability to portray a person deftly and affectionately in a short paragraph – appearance, personality and life story – even when their views don’t match. His self-deprecation and confessional tone. The diversity of the worlds he enters – boxing, hunting, conservation, puppet parades, circuses, city life and country life. His chapter titles are gems: The lapping itchy edge of love, The courage of turtles, The threshold and the jolt of pain,Walking the Dead Diamond River. I’ll miss trekking with him in wild country, rafting with him down wild rivers, hunting wolves, sitting in a law court, watching a pageant of medieval dimensions.

My son enjoyed it too, most of it. Not often our tastes concur.

So there you have it. A couple of months of reading (excluding the pot boilers while I was fasting for two days), and an account of the paths that led me to each book.