One of my daughter’s friends takes care of wallabies and kangaroos who have been orphaned, usually because their mother was hit by a car. Kylie lives in boulder country, along a dirt track, and shares her house with a number of macropods, mainly grey kangaroos, but also swamp wallabies and red neck wallabies. Two tiny ones live in cloth pouches in clothes baskets under doonahs. Five live in a play pen in the corner of the living room. Two peep out of cloth pouches hanging from a frame. Two more are in the yard outside until evening chills the air, when Kylie picks them up and transfers them inside. A mother with a joey in her pouch hovers round kangaroo pellets and eyeballs a willy wagtail. There are more granite hopping below the house. She shows us the body of a really tiny hairless wallaby, ears still close to the head, rescued from a pouch and still attached to its mother’s teat, too small to survive.

Kylie’s knowledge is encyclopaedic and she’s always adding to it as new problems arise. When the animals in her care are ready to be released into the wild, she puts them in the outside pen, leaving the door open so they can test the outside world and return if they need to. Gradually they stay away permanently.

At the moment Kylie is at maximum capacity. The night-time feeding regimes means she is getting very little sleep, and her charges cost a heap to look after – special macropod pellets and medicine when they are sick don’t come cheap. But she is passionate about her role and such passion somehow breeds energy. 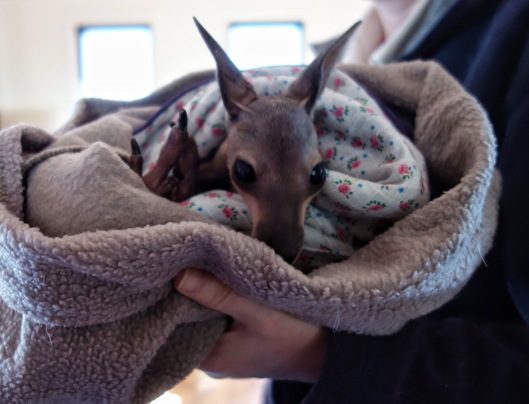 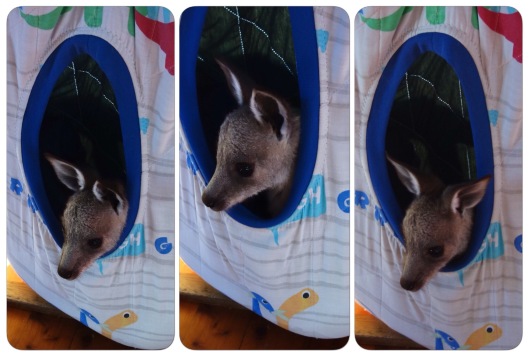 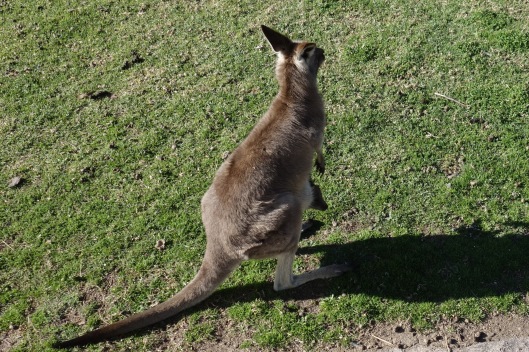 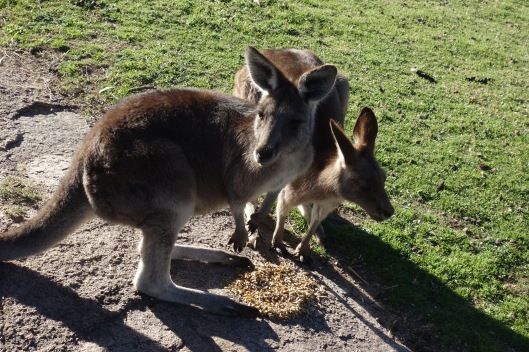 Today the cria is two weeks old. It has survived freezing temperatures, snow, balmy spring-like weather, and our care. 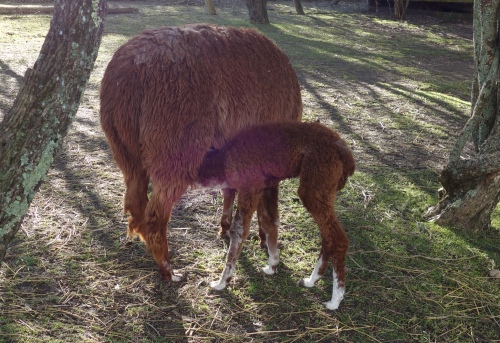 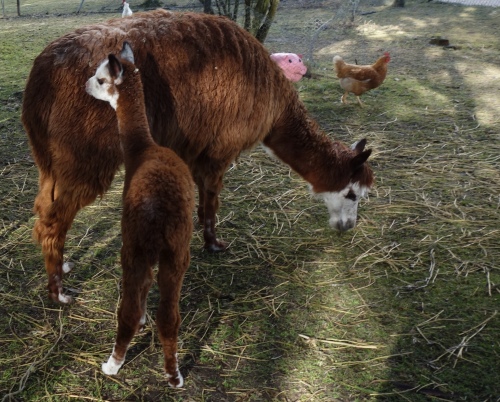 … an unexpected cria was born at Liston. J went out to feed the animals on an icy Sunday morning and saw what he described as “a periscope poking out of a small pile on the ground.” When he went to investigate, he found a baby alpaca sitting down, head poking up, placenta beside it. He is no animal mid-wife and was driven into a state of near panic. The mother, Rosie, wasn’t feeding it, and the weather seemed colder by the minute. An attempt to settle mother and child in the shed failed. He rang the vet, who connected him with a couple who breed alpacas and who arrived with information leaflets, a coat for a baby alpaca, instructions about preparing the coat for mother’s acceptance, and general reassurance. By this time the baby was suckling happily, and the coat was never used. But confidence in its survival was still not strong.

When I turned to Stanthorpe on Wednesday, J met me, saying “There’s something I need to show you.” And there it was. A tiny brown and white creature, long-legged and alert-eared, taking brief and frequent feeds from its mother. Having read the information on alpaca fertility cycles, J became paranoid about the boys impregnating Rosie again immediately, and began a contraceptive fence-strengthening project to keep them away from her.

And then, just when confidence was building, the snow began to fall, and the wind began to howl in a once-in-thirty-years weather event. It took us a while to figure out that alpacas live in totally inhospitable-to-us climates and that Rosie may well have chosen to unpack her offspring in ideal weather. Rosie and babcia Connie stayed close to the little one and they all sat in a sheltered spot under the eucalypts. The cria even frolicked on the freezing day when frolic was the furthest thing from my mind.

The day after the snow was sunny and warm, and, superstition fading, I was finally allowed to take photos. The baby is a week old. 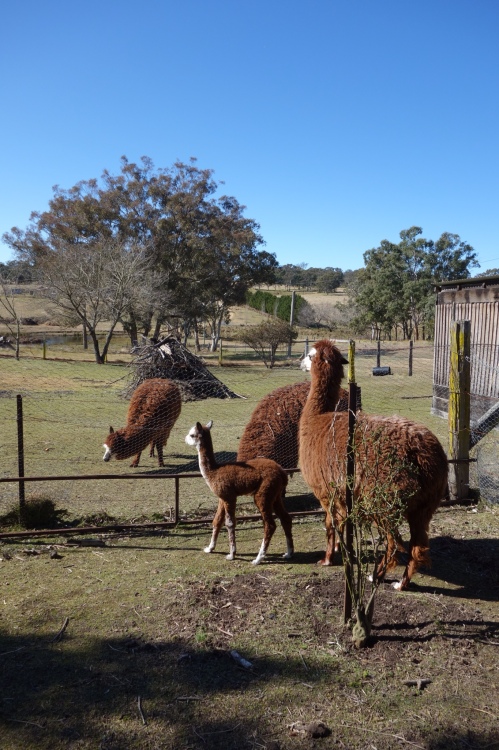 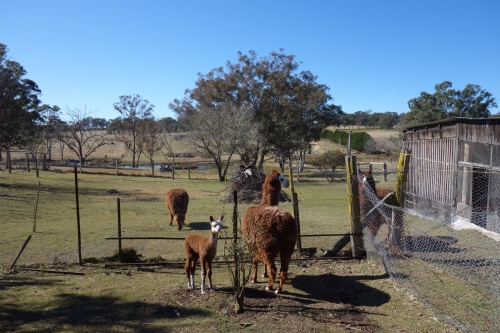 Our greatest pet-sitting challenge at my daughter's house is, unexpectedly, the cat. Leopard Prince of Darkness: I think I've got his title right. If not, I hereby rechristen him because it's an absolutely appropriate title, with its suggestion of satanic cunning. He's quite happy to sleep inside all day, but once night falls the hunting instinct takes over and he wants to be, like his two year old Warsaw human cousin, OUTSIDE. Our instructions specifically say “Don't let the cat out at night.” He doesn't seem to understand that there are predators out there ready to attack him as he attacks birds and small rodents. The Lavender Farm chicken population was decimated recently by a quoll: heads ripped off in a bloody quoll massacre. There's a powerful owl in the vicinity, claws at the ready and quite capable of mauling a cat. He's already been chased by a fox, and the fox I saw crossing the road nearby was twice his size. Since he doesn't recognise self-interest we have to do it for him.

Unfortunately, the loo is outside, and every time we go to open the door we find him ahead of us, ready to shoot out. If we escape without letting him loose on the pleasures and dangers of the night, we still have to get back inside. He's waiting, nose against the door, ready to try for liberty again.

I am reluctant to be outsmarted by a cat. At midnight last night, I strategised before I got up to deal with my ageing bladder. He was awake and prowling round the living room. I picked him up and deposited him in the main bedroom. I couldn't figure out how to use the knife to lock the sliding door (nothing if not inventive, my daughter) so I closed the door into the central room too. There he was, behind two closed doors, but I didn't trust them to contain him. Then I realised that if I left the loo door open, I could see the sliding door into the living room. Aha! Now I'd know if the door was still shut before I had to crouch my way up the stairs to the back door commando-style, so my arms were at cat level ready to grab him. Now our midnight necessity no longer needs to be such a saga of cat control.

J has installed a metal window screen that will cut off his last escape route through our bedroom – a leap through the screen onto the tank stand and he's away – and allow us to sleep with our window open to a starry sky, a frog chorus, the dawn rooster crow, and if we're lucky the catarrhal grunt of the koala that lives at the end of the street.

Maybe these humans can outsmart an uber-feline after all. 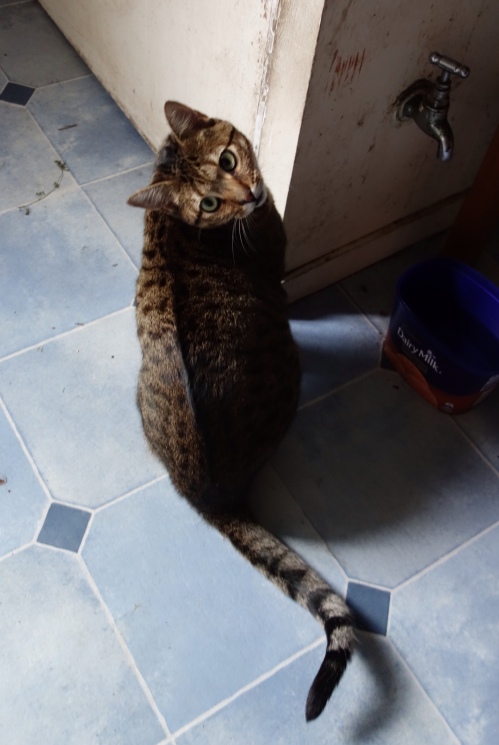 Anxiety set in. We each dealt with it differently. J sat up with a glass of wine and generated increasingly horrific worse-case scenarios and a vow never to look after animals again. I went to bed with a fat trashy novel – “A blinding passion. A perfect marriage. An impossible choice” – to distance myself from crisis. We both thought of anxious nights in the past waiting for teenage drivers to return from parties.

Leopard eventually came home. I put aside the trashy novel. We slept.

A grey evening. A walk with a friend down to the lake through the spotted gum forest and up to the headland. A stroll along the low-tide beach to the sand-stairs back to my village. And then her sharp eyes, breaking through our chatter: “Look!”

We stood on the sandy track, looking, for ten minutes, as the echidna snuffled in the sand, among the dune wattles, unconcerned by our presence. Snout appearing. Back retreating. And then across the track, leathery feet emerging from the gold-tipped spines. Leaving faint claw marks. Continuing to snuffle. Then disappearing.

And us, home to dinner. 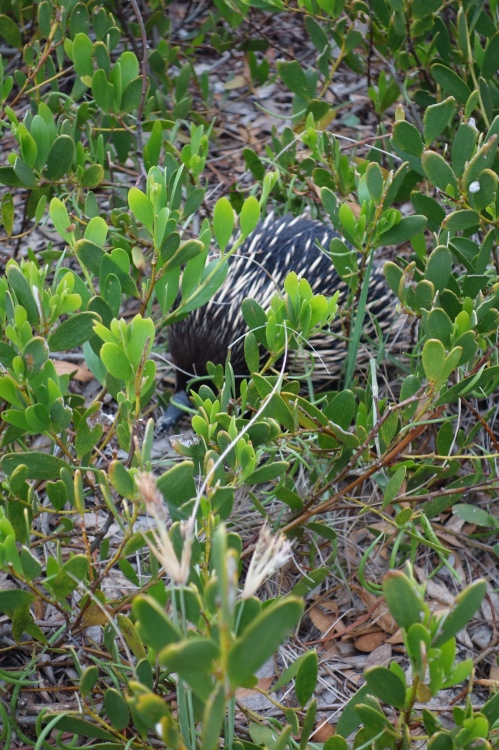 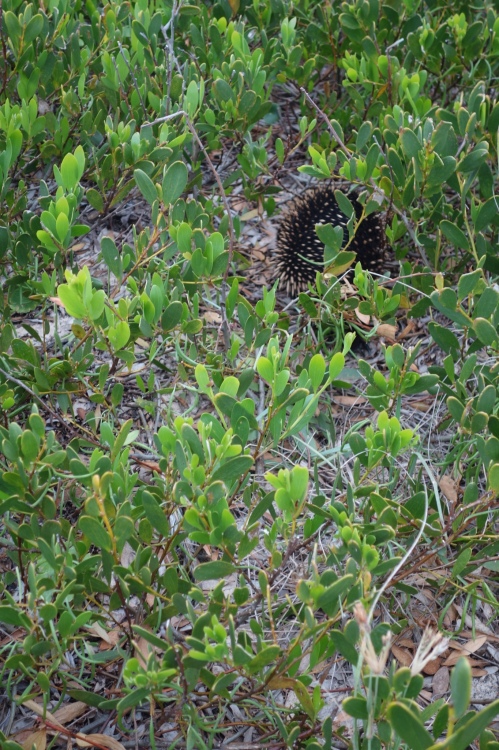