My day in the state archives of Victoria with five boxes of the Geoffrey Cains collection proves that I still have some intellectual stamina. I spend from 10-6.15 riveted by what I find and trying to make sense of it that other people will understand.

Of course I arrive early and have time to ramble around the sculptures: the weird buried ruins of a library in the middle of the footpath; the ubiquitous Mr Lizard and Snugglepot (or Cuddlepie); Sir Redmond Barry; St George spearing the dragon;  and the fancifully be-hatted Lieutenant Governor Charles Latrobe. 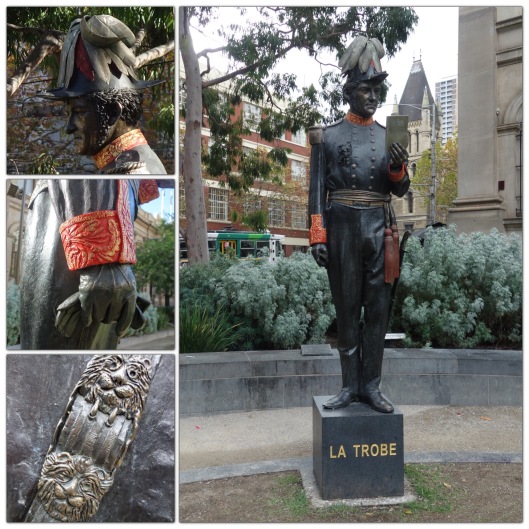 Inside the Reading Room, I collect the first of my five boxes, lug it to a table, and sit in brief anticipation before I open it. I have no idea what to expect: that lucky-dip feel is part of the pleasure.  All I know is that Cains collected items associated with Australian writers. These “items” include, I discover, letters between author and publisher, handwritten poems, the handwritten first draft of a novel with typewritten revisions glued in, the text of a speech by the author for a book launch, newspaper clippings relating to authors of interest to the collector, email exchanges between the speaker at an event and the organiser (Geoffrey Cains himself), and a whole box of scraps of paper with jottings. Cains lays claim manuscripts bound by him in navy linen-weave with an elegant bookplate featuring three waratahs, a hovering honeyeater, and his name written vertically down the side. I am pleased to find my self-editing for this blog, and the suggestions I made to students as an English teacher, reflected in the editor’s scribbles on Brian Castro’s typed manuscript of Birds of passage. Maybe I, in an alternative life, could have entered the world of publishing as an editor.

I encounter Beatrice Davis, a formidable Australian editor, as she works not all formidably, on a typewritten manuscript of Birds of passage. She blacks out some sections, and makes many small corrections. The typescript has the unevenness of lettering that computers killed forever. The next Castro manuscript, first draft of Shanghai dancing, published in 2003, is thick and written, evenly, by computer. This one is edited by Ivor Indyk with a lot more thoroughness: he picks up on purple prose and lack of clarity, queries a particular section, but also pauses to praise: “Great chapter”; “I like the voice here”. He completes his edit with a letter containing “conceptual queries” and a detailed typewritten critique. He also talks strategies for publication: the Harvill representative will be at the Adelaide Festival; half the manuscript will be enough to bowl him over; keep Fiona Inglis (Castro’s agent, I think) in the dark for now. The file includes scribbled notes to himself by Castro in response: a list of things to look at with a couple crossed out.

After lunch – toffeed peanuts, a Boost yoghurt shake, falling leaves, sparrows and the lunchtime crowds of Swanston Street – I return to open another box. I’m back in the world of handwriting , aerograms amd airmail paper from an author who is living in Italy (Via Dei Lucile 26, Lido Di Roma to be precise): typewritten letters on pink paper from the publisher. This correspondence is Martin Boyd’s, the writing member of the Boyd dynasty of artists, and uncle to Arthur Boyd. The discussions cover reprints, attempts to get novels serialised on the ABC and put on the school curriculum, details of contracts, TV rights, and, increasingly, delays in payment of royalties, eventually threats of legal action. Boyd deals with two representatives of his publisher, Peter Grose and Peter Quick, with totally different styles, one abrupt and almost rude, the other chatty and charming. This correspondence extends beyond Boyd’s death as the publishers deal with his nephew Guy.

Who else did of my acquaintance did I encounter in my trawl through five boxes?

Veronica Brady, a social activist nun and academic in literature, sends New Year greetings to poet Peter Skrzynecki in 1997 when he was living close to my childhood home.

Peter Carey, twice Booker prize winner, is represented by signed bookplates, photos, magazine interviews and articles, a series of letters from a friend teaching at the Aboriginal community of Yuendumu, and an inventory of items for sale (including notes from an interview with a dairy farmer, preliminary notes for a novel called “Tax”, original manuscript for an uncollected story, six beginnings, drafts 7-11, proofs with author annotations.) Cains is interested: there is no indication of how much Carey is asking.

Bob Ellis, journalist and filmmaker, writes a lengthy note to reviewers of Ellis unplugged by Michael Warby, listing in 20 entertaining and excoriating pages errors of fact. The handwritten draft and the final copy are both included.

Robert Dessaix, essayist, novelist and broadcaster, responds to a 1991 offer by Cains to provide assistance to needy departments or teachers in eastern europe: he says, amongst other things, “Poles have no foreign currency to buy books.” He also writes to Peter Skrzynecki thanking him for “generous remarks about A mother’s disgrace.”

Michael Dransfield, poet, writes to Thomas Shapcott in the form of a handwritten poem in 1969, and a typewritten one in 1970. There is also a letter from Dransfield’s mother thanking “Peter” for the elegy he wrote on Michael’s death at 24. Skrzynecki again, I suspect.

The final box contains a sub-box full of scraps of paper from Brian Castro, averaging about ten words per scrap. This defeats me: I only excavate three layers, fearful of disturning any unlikely order, and worn out by a focused day.

I enjoy these glimpses behind the scenes of the publishing and writing world over fifty odd years. I note the changes from hand and type-written to wordprocessed, and mourn the loss of personality this presages. Martin Boyd’s irascibility is intensified by feeling his pen mark the paper. Maybe his communications would be more measured if he was emailing., and certainly responses would be more immediate and not depend on strike-free mails in Italy and England. I also note the fact that this is a meagre selection from the vast quantity of written material generated by each of these writers, and that I have only skimmed five boxes from a much larger collection, cherry-picking writers I’m already familiar with.

I’m left with a few questions I haven’t begun to answer. What prompts someone to collect this stuff? And what prompts me to want to scrabble through it?