Yesterday I was waiting for a friend in a Dalmeny cafe, overlooking the sea. As I perched on a stool relishing the feel of the air on my skin for the first time since I returned from the gelid north, my eyes were drawn to a group of women chatting animatedly. On their table was an irresistibly beautiful piece of corrugated iron, curving around its rust and paint.

As they were leaving, I asked if I could photograph it and discovered that the woman who found it, flotsam on the beach, used to sculpt in corrugated iron, bending it into bows or knots or peeling it into strips with hands whose strength has now gone, sometimes adding her own notations. Another woman in the group, a jewellery maker, planned to use this piece of dilapidated beauty to display her jewellery. 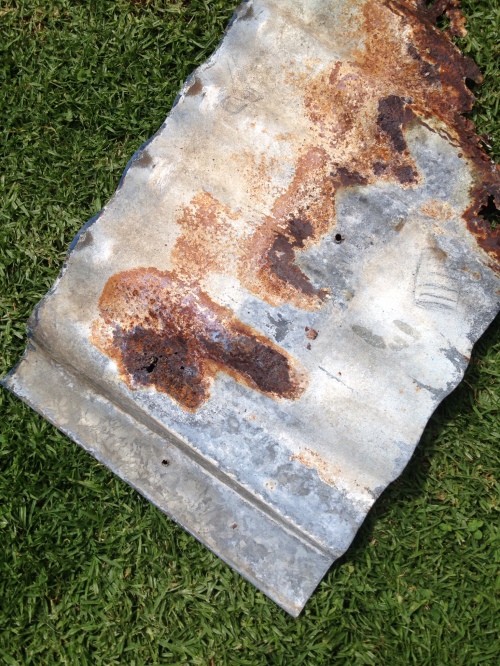 Heyjude at http://smallbluegreenwords.wordpress.com/bench-series/ has created a monster. I am strong enough to bypass a challenge, but a bench challenge challenges that strength. This morning, a bench in a garden thrust itself in my way at the doorway of a friend’s house where there was no avoiding it. I couldn’t even say “Lie in wait all you like. No camera” because I was carrying my treacherous i-Phone, which muttered “No excuses. You’ve got me.” So here is my inescapable garden bench.