I've been too long away from home – six weeks in Warsaw, and then six weeks in Liston. I'm sitting here now at my living room table, in the chaos of arrival, with the sound of the sea as background to my homecoming.

It's been a long journey – 1400 kilometres, three days and two motels. Plans to divert to Broken Hill on a camping trip faded with the cold: the thought of stepping out of the tent into a morning of frost and chill wind, rather than a cosy living room with its non-stop fire, held no attractions: we are obviously softening with age. As always, the journey itself provided many pleasures.

We left Liston with mixed feelings (me: J was mightily relieved to be handing over onerous animal responsibility), scraping ice off the windscreen at 7.30.

Our decision to leave in daylight was justified. The Bruxner Highway from Tenterfield was lined with dead macropods – wallaroos, pretty faces and eastern greys. A sign off to Silent Grove attracted me, until J, who has been reading the horror story of Aboriginal massacres by white settlers, said “I wonder why it's silent?” Photogenic Besser-block tobacco barns marked the fading of a carcinogenic industry – photogenic because of their small second roofs to let the air in, not the building materials. Besser-blocks don't create attractive ruins.

Other place names gave us food for more pleasant speculation: Horse Gulley West; Goat Rock Road; Turkey Plain; Ticketty Creek; Flat Bottom Creek; Lever Arm Creek; Mosquito Creek. They represented a hinted-at story of place, and helped us people the landscape with our colonial predecessors. Signs were also interesting for a variety of reasons: JESUS DIED FOR ALI; Beekeeping operation ahead; Welcome Fatty and Big man (this one on a tree where the placement of burls inspired the painting-on of a red bikini); and a number of signs indicating Cunningham's Track, Cunningham being the nineteenth century explorer who passed through this country (using Aboriginal tracks? Aboriginal guides? – note to ourselves: Read Cunningham's journals.)

As the day drew on, and we drove the familiar back road from Bingara to Narrabri, past the glaciation where we have camped often, the light caught clouds of delicate creamy clematis and the more solid creaminess of wonga vine, a sure sign of spring at home. We passed two drovers on horses with a small herd of cattle and a brown working dog. Near Mt Kaputar, where snow had recently closed the summit camping ground, the water was running over the road. There was very little traffic, so we stopped the car in the middle of the fords to look along creeks we'd never seen flowing before.

Our motel, the Wagon Wheel, turned out to be perfect: a room with a view out to white-trunked eucalypts, and far enough back from the busy Newell Highway to dampen the incessant noise of semi-trailers to almost nothing. It was dog-friendly (I know. We've left the dogs behind) and had extensive slightly quirky gardens, including a flower-painted wheelbarrow full of purple sweet alice. 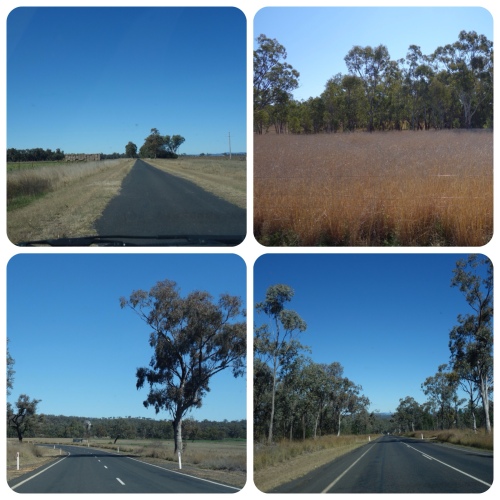 Water across the road 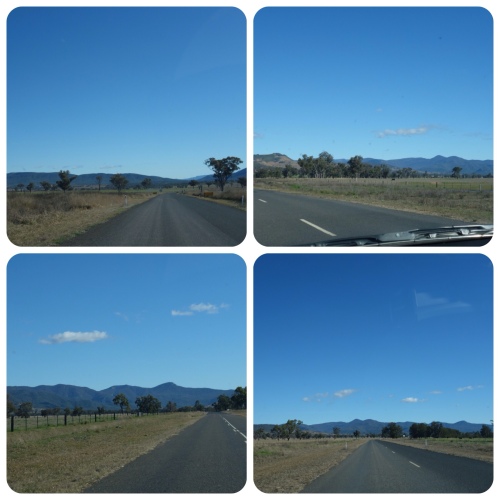 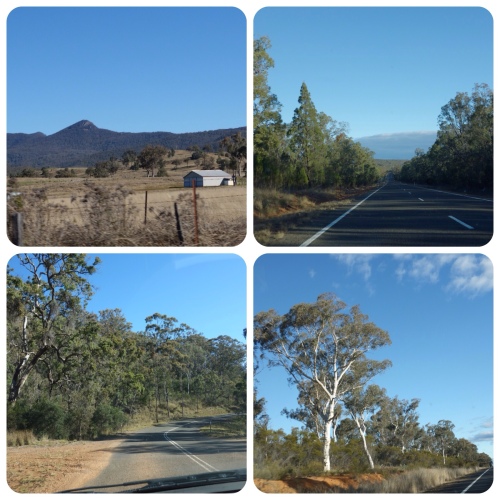 Heading towards Coonabarabran from Bingara 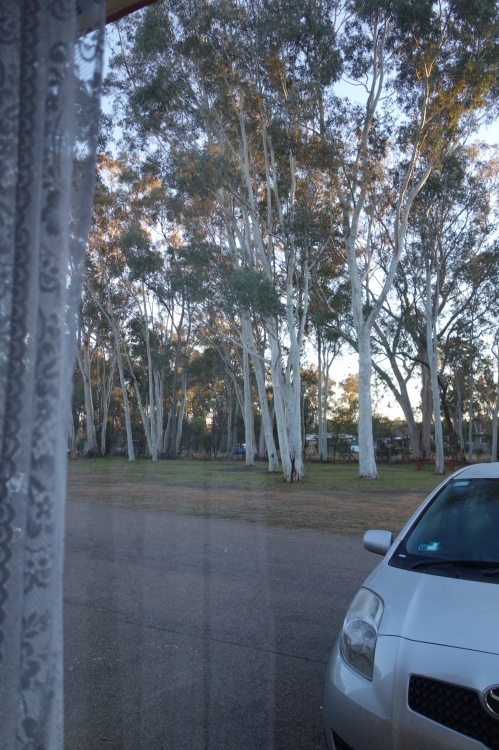 View from the motel window

As we left Coonabarabran we were delighted to see the distinctive shapes of kurrajong trees dotting the paddocks, obviously replantings of that bare expanse left by rabid tree removal; and self interested too, since they're the only trees suitable for feeding cattle in drought. On the horizon on our right were the volcanic silhouettes of the Warrumbungles, the morning light falling dramatically on cliff faces. A bloke in a ute loaded with crayfish traps was heading of towards the river. My listing urge collected some more names: Donts Creek; Coolbaggie Creek; Paintmine Road; North Terramungamine Road; Cumboogle.

On the road between Yeoval and Cumnock nearly every property has made use of old bits of farm machinery to create bike riders ranging from caterpillars to dinosaurs. Every time we pass through the craze has spread: it began with hanging bikes in trees. Finally on the outskirts of Molong I managed to snaffle a photo of figures made from brightly painted drums.

A swathe of purple hardenbergia mounded over a bush by the roadside, and the rocky hillsides glowed in the afternoon light. It was a short drive on Day 2, and we were settled in our motel in plenty of time for a stroll around Cowra, which earned a separate post, as did our morning ramble around the Gilgandra Flora Reserve.

In the motel gardens

It was warmer this morning, although the occasional breeze was still chilly. We were more silent in anticipation of home, and less photographically inclined. The road was another kangaroo alley, confirming our decision not to leap up at 3 and hit the road. It was busy with kamikaze birds: pink-breasted galahs, flocks of sulphur crested cockatoos; groups of chatty apostle birds; low-flying kookaburras; a pair of superb parrots; and smaller parrots with soft iridescent green backs. The countryside was spectacularly lush: sheep with lambs, cows with calves, pasture flourishing.

In Murrumbateman, the creek running beside the busy Barton Highway into Canberra was loud with frogs; the reflections were deep; and in the surrounding park fat daffodils were beginning to unfurl. We speculated idly about why cement doesn't decay gracefully, and compared it to the crumbling brick ruin outside Braidwood, with its chimney and rough tumble-downedness. Maybe ruins need to be uneven and patina-ed to be picturesque? In Braidwood, home of the Barbed Wireless community radio station, we had a bit of a town ramble to straighten out, admiring the old (by Australian standards) building, and ate a ritual pie from the very good bakery.

Then it was down the Clyde, through rainforest patches, past spotted gums and burrawangs, and finally that straight line of the sea from the hill near home. 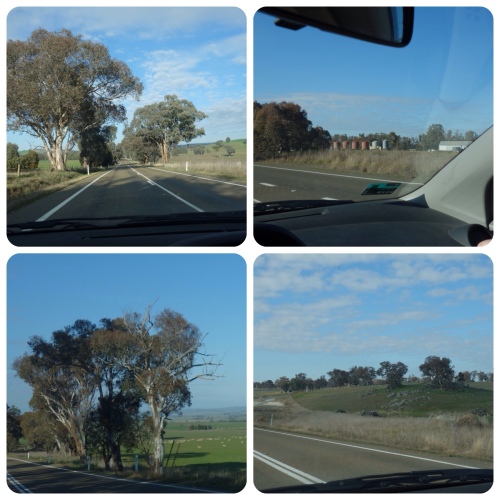 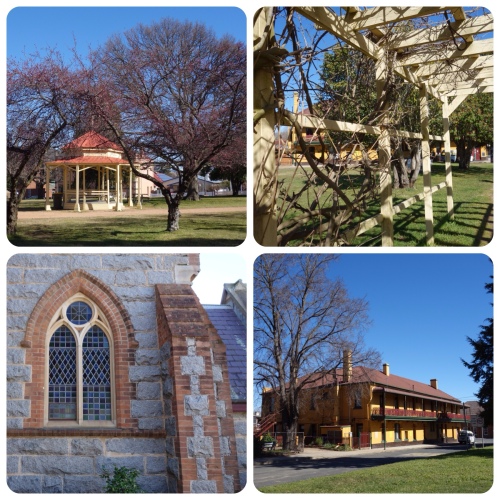 A taste of Braidwood