A few weeks ago we flew over the wilderness to the west of home: a few days ago we drove out into it, a glorious day of 4WDriving in the capable hands of our Queensland son. We left the highway just north of Bodalla and bored 70 kilometres into magnificent country where we saw not another soul.

Our first stop was familiar. I’ve been to Bood-jarn, which I’ve always known as Hanging Mountain, a number of times: it’s close to the limit of the capacity of my small cars. A short track led through eucalypts, grass trees, white tea tree (unidentified species), red bell flowers (Epacris impressa) and pink trigger plants, to a lookout where we experienced that lovely clean palpability of mountain air, and a view out over ridge after heavily treed ridge. On the horizon, Gulaga snuggled under her possum skin cloak of clouds.

Since my last visit, they’ve installed a railing and information panels telling the Aboriginal story, and vandals have had time to saw off a few of them. Three remained. One told how in the Great Flood the Ancestral Being turned some humans into birds – gannets, snipe, cormorants and darters – who could dive deep, rescue people drowning and take them to safety in high places. One spoke of a network of “bush highways” leading to ceremonial and learning places, campsites, and places for gathering medicinal herbs, bush food and materials for tools and weapons. It also told of beacons lit to guide travellers, signal ceremonies, and ask permission to enter tribal territories. The third one focused on lighting and managing the beacons: the twirling of a stick in fibrous material to start the fire with leaf litter and add it to the fire stack; and then the choice of wood to create different colours and density to create a vocabulary of signalling. 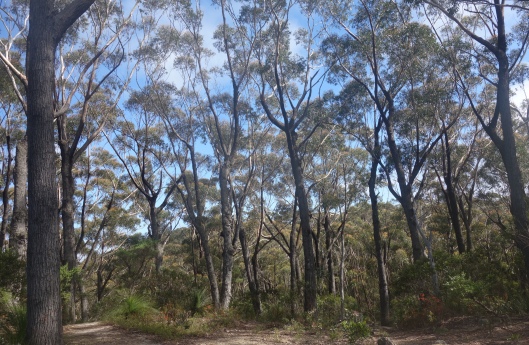 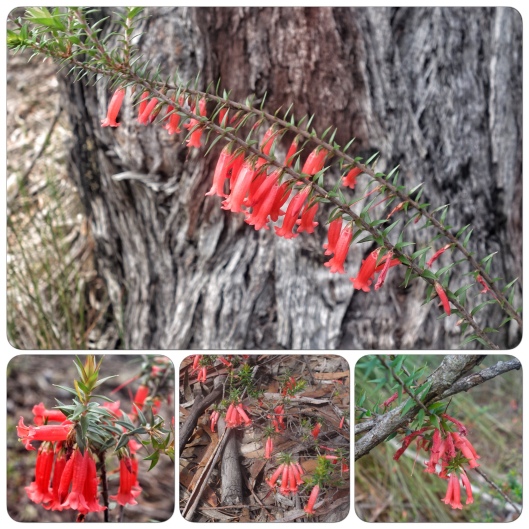 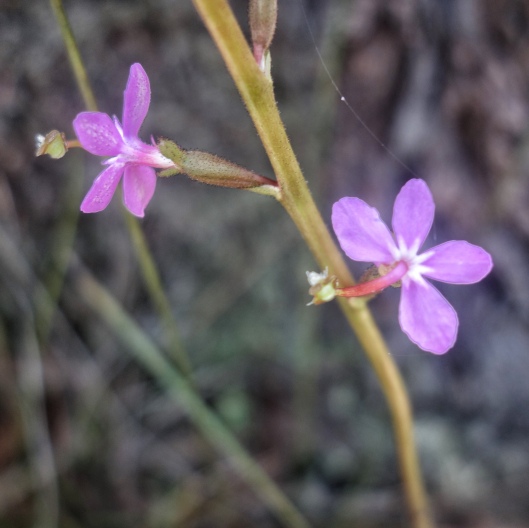 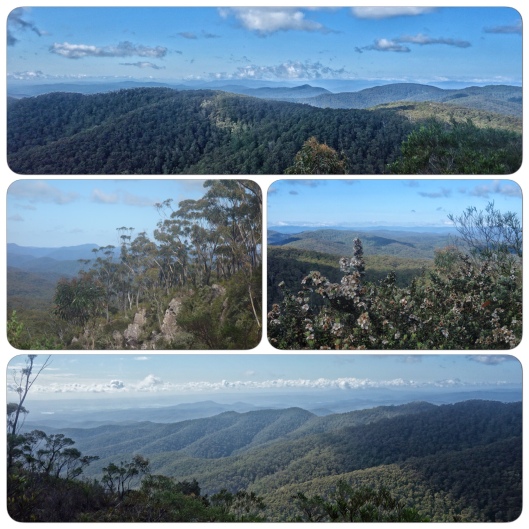 After Bood-jarn we began the serious business of descent, 800 metres down down down into Bendethera Valley – except when we were mounting substantial anti-erosion humps. The bush was close to the road, and the hillside dropped away very steeply into rugged gullies through tall tree ferns. Occasionally there was a glimpse out to the ocean, and we were accompanied by a conical mountain we struggled to name as we lost orientation to familiar places. I found it harder and harder to believe that J drove a beat-up Mazda sedan down here once, and that Rose and Marcin cycled here before their marathon from Tokyo to Warsaw.

Eventually we reached the valley and the first of the river crossings, which is where the Mazda adventure ended all those years ago. We however, powered through, this one and a bit more carefully the second one, using a bypass to avoid a deep hole and large boulders with scrape marks where the less cautious had bottomed out. 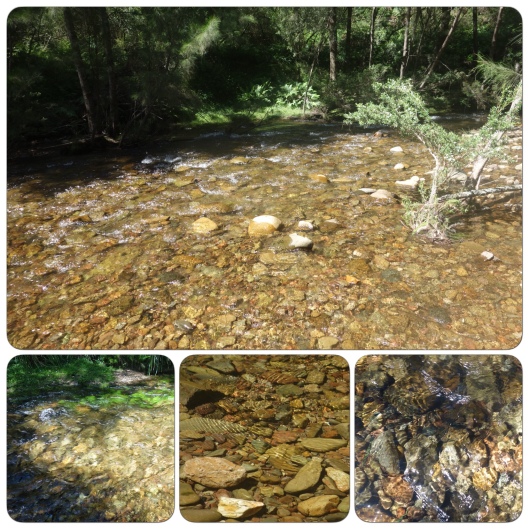 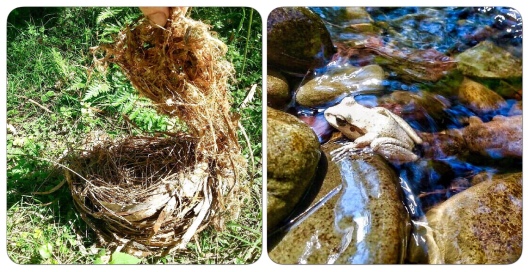 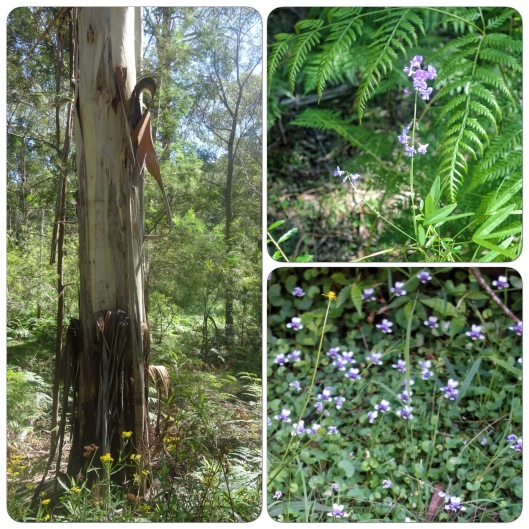 Suddenly we were in a capacious grassy valley, home to multitudes of kangaroos who eyed us off calmly. It was campers’ paradise – lots of secluded spots down by the Deua River or Con Creek or Little Con Creek. Katie sat on the window ledge photographing with the new go-pro camera.

Everything looked relaxing and peaceful and easy, until we started reading the information panels. The George family settled here in the 1860s after Joseph George came across the valley when he was searching for a stolen horse. He and his wife, Mary, were tough. They had fifteen children: the midwife, Suzanne Lavis, a surname that still thrives around home, came from Moruya to live with the family at lying-in time, leaving her own family to do so. The information panel at the grave of one son included an ominous note that the mortality rate for children at the time was one in five.

On a hillside were the remains of a substantial oven, the front for baking bread, the back for scalding pigs. There were still traces of water races that allowed gravity-feed watering of crops. As erstwhile market gardeners we were in awe of the enterprise in this distant valley, and then realised that there was a market for vegetables, bacon and turkeys waiting on the goldfields of Araluen and Nerrigundah, although the journey up out of the valley still looked daunting. Story goes corn was dribbled from a bag to encourage turkeys to walk to market. 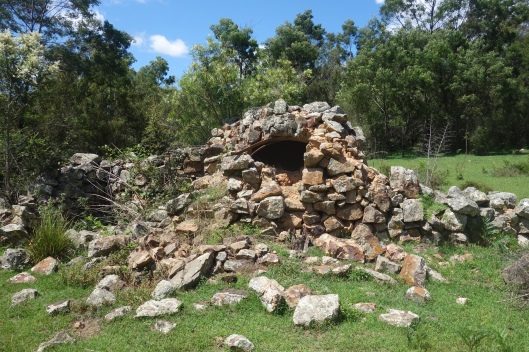 There is no escaping geology. The limestone caves in the valley indicated that this was once (430MYA) a shallow sea-bed. It was fifteen years before Benjamin George, one of the sons of Mary and Joseph, came across the caves (maybe not the son whose father set his broken leg and left him to recover in a lean-to built round him, bringing him food for two weeks until he could stagger home again.) People were so interested in strange landforms I. The late 1800s that an 800 hectare caves reserve was established. A hundred people a year came into the valley on horseback; and walkways, stairs, ladders and ropes were installed in the caves to help them explore.

We set off along a grassy track beside the creek towards the caves, ears drilled by the sound of cicadas which drowned out the gurgling of water. At the first crossing Katie found me a sturdy stick and offered her youthful arm as I stepped from rock to wobbly rock without wetting my shoes. She and my son do this stuff barefooted and surefooted. The track was edged with maiden hair and herringbone ferns, and suddenly a tall dark pink hyacinth orchid. We crossed the creek three more times, and just reached the point where there were signs of limestone accretions on the rocks when J’s leg began to object. Not the caves today. I wasn’t upset: an 8 km return journey in the heat of the afternoon wasn’t inviting, especially when the incentive was narrow holes to crawl through and dark places full of bat-shit. On the return walk we spotted the silvery leaves of the Bendethera wattle, a species that grows only here.

We returned to the noble car that had got us to this splendid place, circled the open area, saw a wild pig dash across the road behind us, and crossed a few more creeks, J a tad anxious about big boulders. Our last stop was a deep swimming hole where everyone else submerged and I wimped out. I swore an oath: Never again will I sit on the bank while every one else frolics. 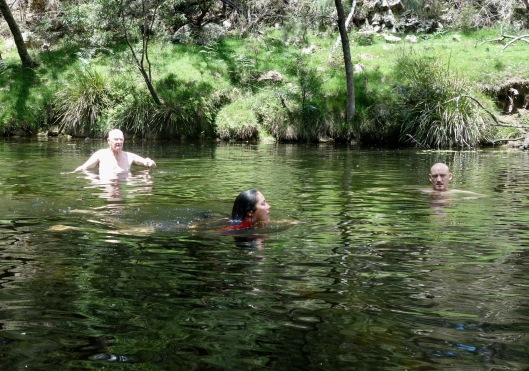 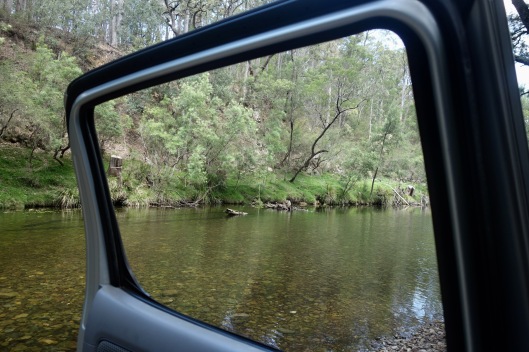 The climb out of the valley was steep and bone-shaking. As we approached Bood-jarn mist descended and swirled briefly around the tops of the trees. When we rejoined the highway at 4 o’clock it felt like an alien world.

The next day, Katie’s sister went out to Bendethera to camp for a few nights, and found the whole area along creeks and rivers packed with holiday makers.

Attribution: The frog and the ingenious bird’s nest with lid were i-photographed by Stephen Moore and used with permission

PS and NB: The next day I plunged at dusk into the river near home.