You sit across the table from one another, you and Natalie. Her offering is a closely argued document called “Relationship of mafic rocks and surrounding rocks in the inferred subduction complex, Batemans Bay district, south-eastern NSW”. In front of you is a small black notebook, with the hopeful heading Geology 2017. You are here to negotiate understanding, you a novice geologist with serious limitations, her a university student offering her honours thesis. You feel blessed to have found her. She writes about a place you’ve visited, and she draws detailed  diagrams of different formations, which is the next best thing to her actually standing on a rock, pointing at it, and saying “This is the Bogolo formation. See here and here and here … these are the characteristics.”

But unfortunately for you, she uses words as well as diagrams, lots of them. Her lexicon is as dense as gabbro. One sentence might offer you “shear zone thickening”,  “olistrostomal flows” and “disrupted bedding”, leaving you with very little to hang understanding on. Simple pronouns lack meaning as you fail to understand their antecedents. Even a phrase like “migration of faults” where you know the meaning of the words in isolation raises questions about what exactly they mean here. However, she’s done her bit, so she leaves you to it.

You struggle on because you really want to know. You think about yourself as a learner: that urge to go and do something else – knit, cook, even housework – rather than battle on through the hard bit. “Geology for dummies” doesn’t always provide the desired definition.

It’s a long long time since you’ve done such intellectual battle. You mainly read history where the discourse and language is familiar. Even an occasional foray into the world of Nabokov’s butterflies or Gawande’s history of cancer doesn’t make this kind of stringent demand. There, if you don’t understand you can skim over the hard bit without missing too much. Rocks and their foundation stories make no such concessions. If you want to understand you have to persist and hope that eventually you’ll get it.

The Bogolo formation is more than 90% mudstone. Long, long, long ago very fine clay particles settled at the bottom of the ocean or a lake or a lagoon or a peaceful stretch of river. Slowly the resulting mud was buried and compressed by the weight of more sediment. The water squeezed out and the slurry became rock. But the Bogolo Formation isn’t just mudstone: it’s a mélange, including fragments and blocks of sandstone and basalt with a diameter somewhere between a centimetre and twenty metres in an unsorted mishmash. As a sedimentary rock it should be layered, but it isn’t, not systematically. It’s been knocked about in its formation. Geologists can’t agree on how. Caught up in a monstrous flow of debris? Crunched up in a fault system? A casualty of huge mud volcanoes? It hasn’t had an easy time of it, whichever explanation you go with.

It’s a glorious spring day as I walk down the spur to Bogola Headland, Gulaga looming a few paddocks away on my right and the sea sprawling and sparkling on my left. Surely this is where I’ll find laid out before me the Bogolo Formation Natalie has introduced me to and that I’ve read so much about. I round the corner and step onto a rock platform. It’s flat, unbroken by the fissures or the sharp edges that usually make rock hopping a business of intense concentration. I stroll over the surface, mostly level, no need to grapple with foot-eye coordination, except occasionally where a boot-sized hunk extrudes. The rock, grey-ochre, silver, purple, copper-streaked, with occasional constellations of white specks, has an almost talc-like smoothness and occasional stripes. I reach my hand down and stroke the silkiness and the slightly rougher streaks. Small nodules / excrescences in the vertical surface take the shape of coronet, braid, necklace. Near the ocean, lumps become pinnacular, sharp edged, huge. It’s easy to look and describe: I’m quite at home with rock patterns, the sun and the sea. 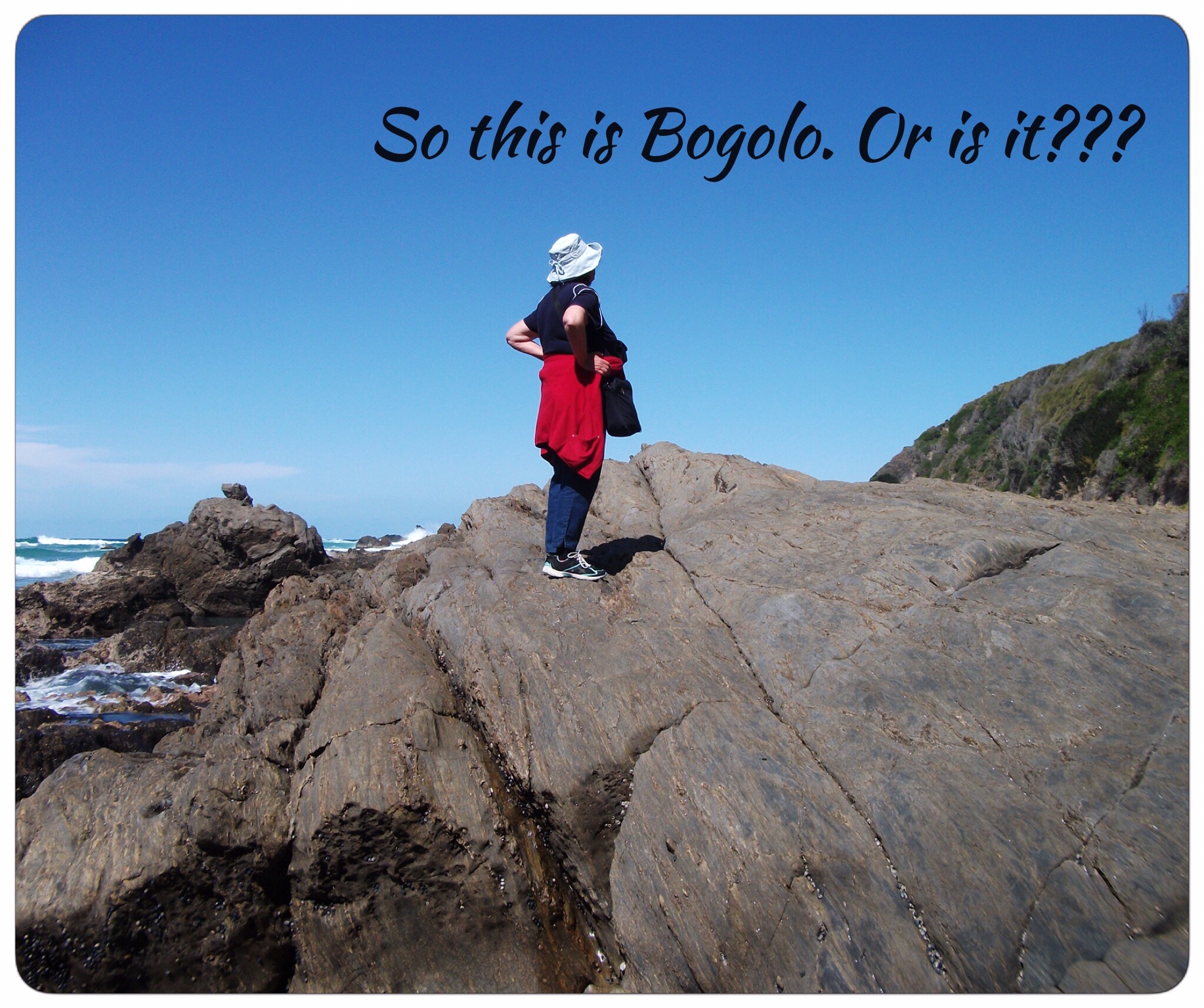