You never know what will turn up at the local library. This time it’s migratory birds and migratory prints.

The presenter is the shorebird recovery expert from National Parks, Narooma. She keeps an eye on migratory bird numbers and safety in the estuaries and on the beaches from Bateman Bay to Eden. She begins by introducing us to E7, a totally inadequate name for a bar-tailed godwit who has been tracked flying non-stop over the ocean from Alaska to New Zealand, an incredible 11500 km in 8 days. And here she is. 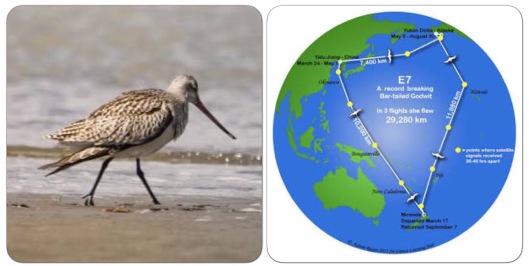 We learn more about the The East-Asian Australasian Flyway which extends from Arctic Russia and North America to New Zealand and includes Mongolia, China, North Korea, South Korea, Japan, the Philippines, Vietnam, Laos, Thailand, Cambodia, Myanmar, Bangladesh, India, Malaysia, Singapore, Brunei, Indonesia, Timor, Papua New Guinea, and Australia, so many places for habitat to go awry. Each year 50 million migratory waterbirds use the flyway. We meet other birds that arrive on our local shores and estuaries. We see the beach box which is used to educate people about shorebirds and their sometimes non-too-canny nesting habits.

Then we move into the world of art. Kate Gorringe-Smith starts from a premise: Knowledge bestows ownership; uniqueness bestows value. She invites twenty print makers along the flyway to create prints featuring birds and their migration in some way.  They do so, using a wide variety of techniques, sometimes with the signature of their culture, sometimes not.

(If you want to see these images individually, with artist name and print technique look here.)

But that’s not the end of the story. Each original print is folded and addressed to an artist or scientist in one of the countries along the flyway and sent off by normal mail, and then sent back.  The exhibition includes these letters, marked by their travels with postmarks, and stamps, mimicking the passage and collateral damage that happens to birds, although none of the letters go missing. 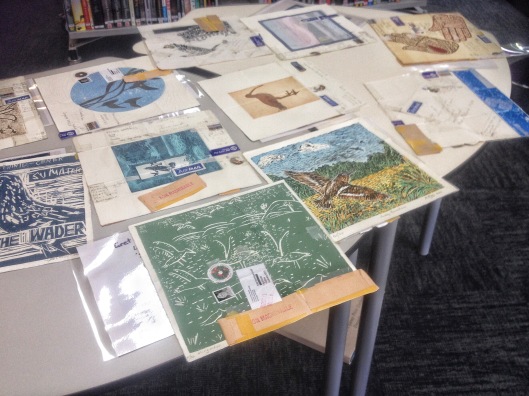 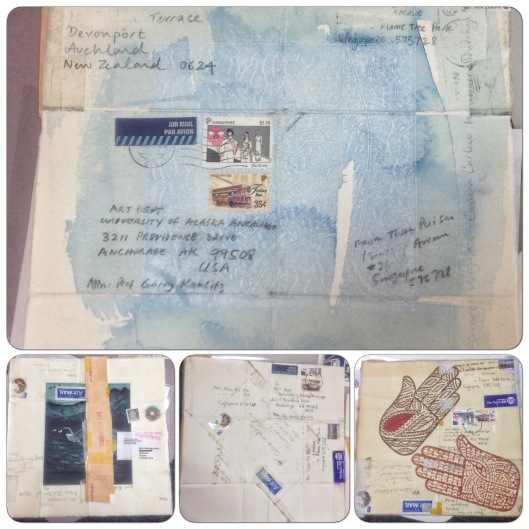 And so to this exhibition in the three libraries  of the Eurobodalla Shire, its first airing in NSW.

If you’re as intrigued by this project as I am you might like to explore it further, and also take a look at the overwintering project and its rationale.