Umm Qais was the second Friday excursion from the dig at Pella. Our route was along the Jordan Valley, armed with our passports because we were so close to Israel, but a seller of cos lettuce directed us up a very steep windy road, past a dam and olive trees instead.

Umm Qais, fortress and frontier town in ancient times, is now an extensive suite of ruins, with a view to the Gollan Heights and down through haze to the Sea of Galilee. We entered the ruins through an Ottoman village of black and white stone. The columns in the ruins included basalt, not the creamy pink of Jerash. I went through an arch which was in fact the vomitorium of a basalt-seated theatre which was being reconstructed. The top rows were a jumble of stone.

The cardo paving was quite intact, with clearly defined wheel ruts, and grass growing through the paving. It was edged with marble supporting columns. The arcade of shops with squared lintels was very similar to the souq in Damascus, although more regal in stone.

We ate lunch – mezze, chicken and chips, and a can of beer – on a terrace with a spectacular view, the sound of goatbells the musical accompaniment, and then drove back along the Jordan Valley, past flimsy guard posts, and very close to the traffic travelling Israeli roads. 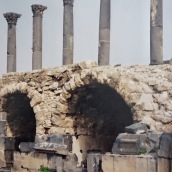 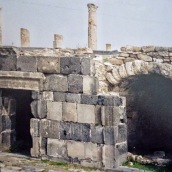 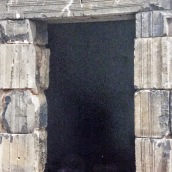 For a much more detailed look at Ajloun, Jerash and Umm Qais, read Cathy’s account of her adventures, and revel in her wonderful photos.