We’ve written for three or four hours – after all that is the designated purpose of our week together, me and a very special friend – before we set off to visit a geriatric who raises the bar of longevity and survival extraordinarily high. Camel Rock, so named by the whitefellas, has been around, one way and another, for 450 million years. 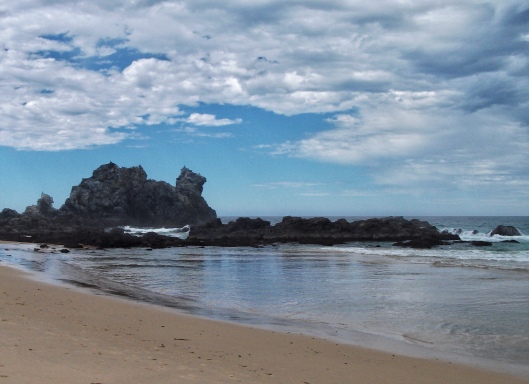 It’s had a rough time of it and bears the marks of its history, as do all old things. It was birthed when an avalanche roared down over the continental shelf, carrying with it broken-down rock ranging from boulders to minute grains, which settled into layers on the bottom of the sea. Over the millennia they have been baked, squeezed, buried, exhumed and eroded to become today’s rockscape. Undulations in the fine layers at the top of each bed record the ripples as the flow comes to rest. Often turbidite beds are stacked on top of each other by many undersea avalanches covering vast periods of time. As you can imagine rocks now are often highly deformed by all this pressure. 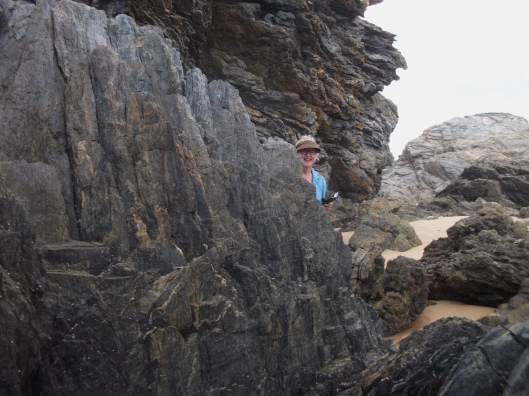 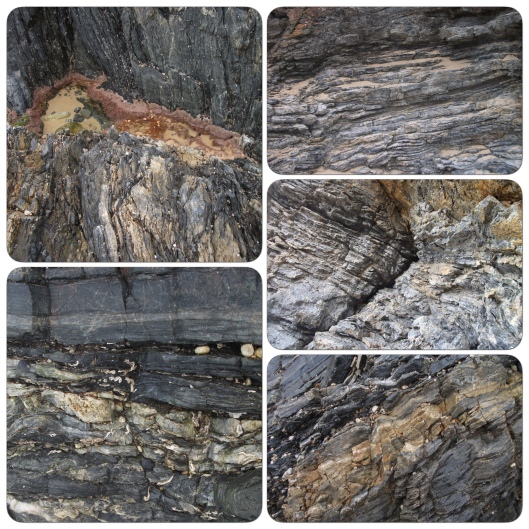 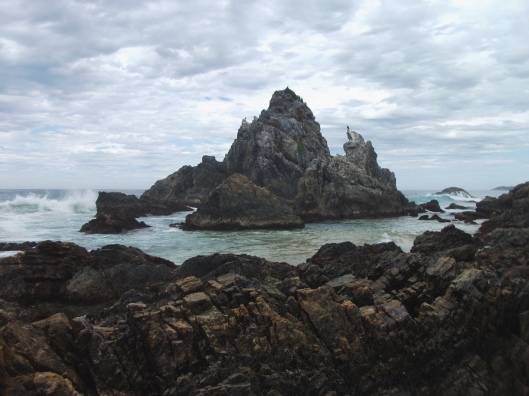 More recently, the area around Camel Rock became a sacred Aboriginal site. People from up and down the coast and from the Monaro gathered on Murunna Headland above the Rock for corroboree, the last time as recently as the 1930s. Tools were traded and food from ocean, estuary, lake and river shared. A freshwater hole at the base of the southern side of Murunna was a sacred place for women. The head of a woman in the rock was seen as warning of a dangerous rip.

We were drawn to visit Camel Rock as a companion piece to an exhibition at the Spiral Gallery in Bega. The title of the exhibition is part of a quote from Professor Brian Cox: “Earth is our ancestor. The restless earth is your creator.” Joy Georgeson’s ceramic hollow hand-built sculptures, decorated with engobes, oxides and glazes, were inspired by the geology and biology of Camel Rock, and Ivana Gattegno‘s art, acrylic, and black and white charcoal, by the landscape around Gulaga and Mimosa Rocks. You may recognise a pile of stones and the offshore rock in the second image from a recent post. 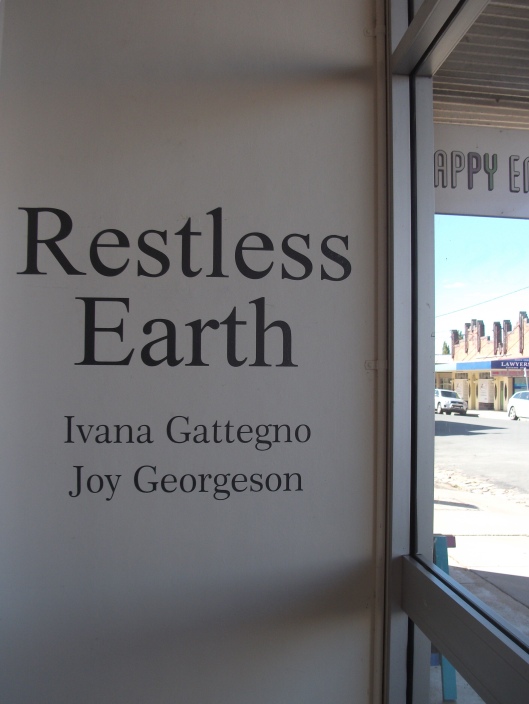 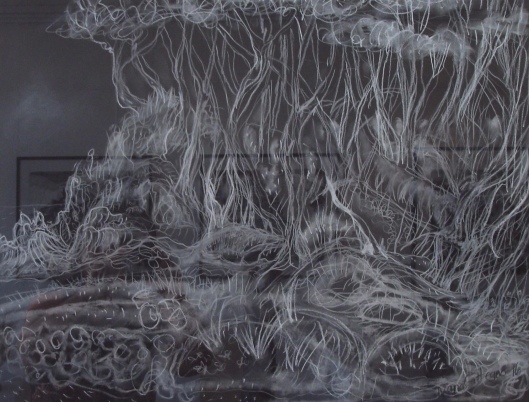 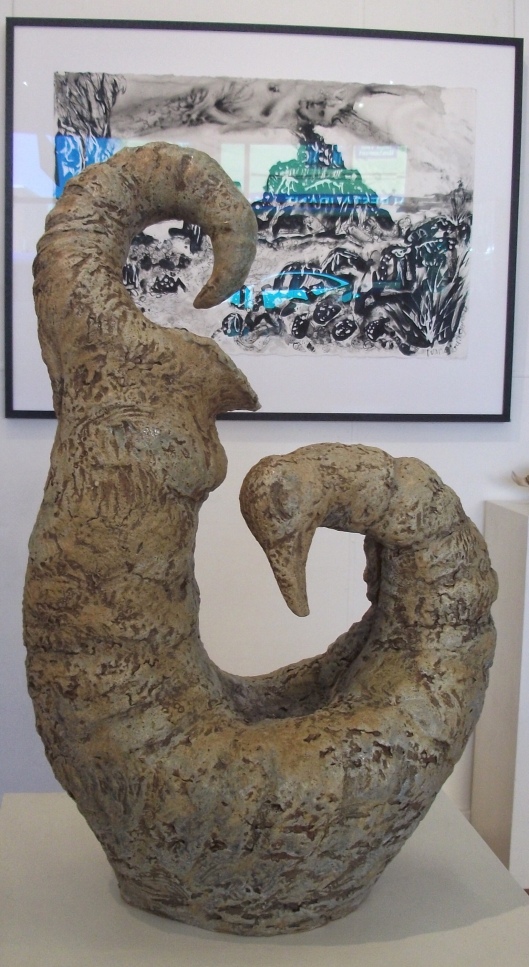 In the sand dunes behind Nangudga Beach, someone has stretched green netting, now raggedy and tumbling down, obviously intended once upon a time to mark a site of some sort. And there it is: a shell midden, layers of shell remains and bands of black ash. Here the Ancestors lived for many centuries, maybe as long as thousands of years, on rich pickings from the sea, sitting by cooking fires overlooking the ocean, leaving ash traces of their fires and shell traces of their meals. Not longer than 8000 years at this particular spot: it was kilometres inland in the last ice age. Their life here ended when settlers moved them onto reserves and established properties on their territory, at least as late as 1895 on this bit of coastline. 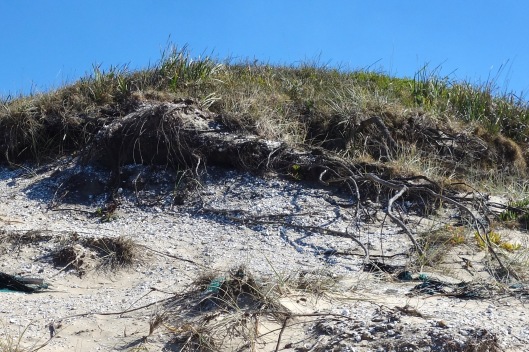 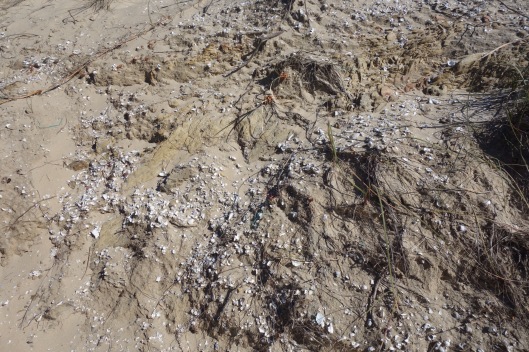 That’s on Saturday. On Sunday we return to Glasshouse Rocks / Cemetery Beach. At the foot of the track down from the cemetery there is a mound of rocks and my camera is drawn to the large shells scattered amongst them. As the hillock thins and the rock pile becomes shallower, I notice big shells congregating at the point where the dunes meet the beach. I raise my eyes, and there again is that line of ash, those shell fragments. This time the line goes a long way, the length of this cove north, around the chevrons sharp in the grey light, and continuing further south. It hides behind grass stems and we speculate that it stretches up the hill under the bush now growing above us. We decide to leave further exploration for another day: we’re not prepared for snakes and ticks. But we now have yet another focus for our attention in the landscape where we live. 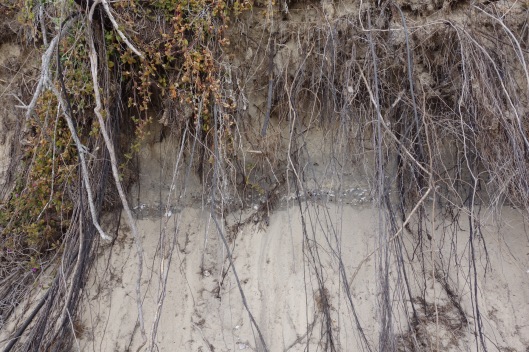 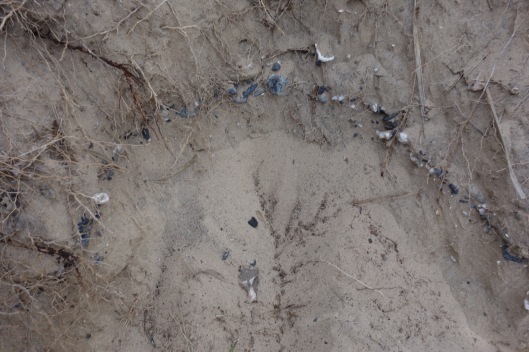 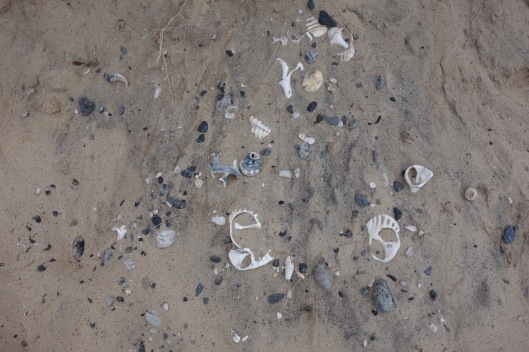 My journey back to Potato Point – an otherwise crazy-looking route into the central west of NSW – is determined by a desire to visit Sculptures in the Scrub near Baradine. As it happens, that doesn’t happen. It rains and I’m advised not to take the Yaris along the 30 kilometres of dirt. An extraordinarily helpful woman at the Pilliga Discovery Centre tells me about an alternative, and assures me I won’t be disappointed. It means a detour of 70 kilometres, but who’s counting kilometres on this particular adventure?

So I head up the Newell Highway, something I usually avoid like poison, and take a turnoff along a sandy track. The local Aboriginal community doesn’t advertise these special caves by a highway sign, but I have a brochure with directions.

I walk along well-marked and easy path, through burnt out bush where wildflowers are beginning to flower and young leaves are backed by black stumps. 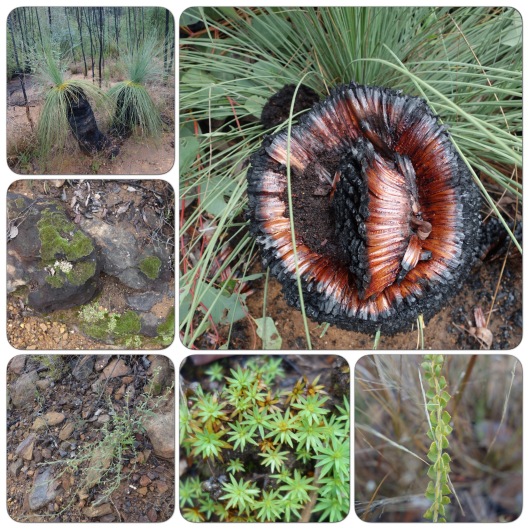 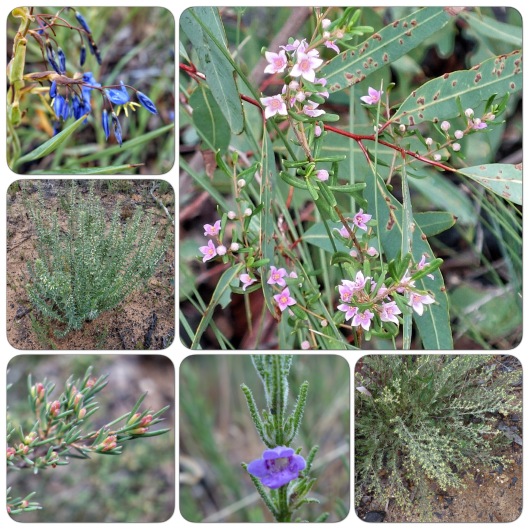 The path slopes gently upwards until I have a view across the Pilliga Scrub. And then the rocks appear. For about a kilometre I’m walking around a massive outcrop of sandstone, lost for words in the face of the beauty of pattern and variety, as I was in the immensity of Wadi Rum, and at Wasp Head near home. 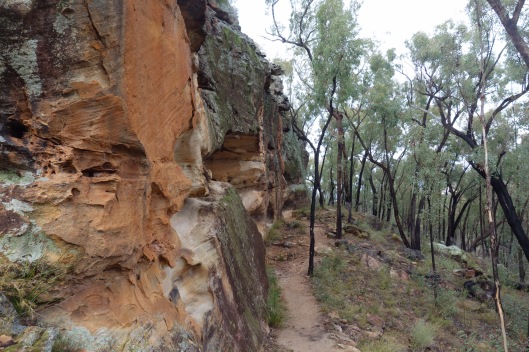 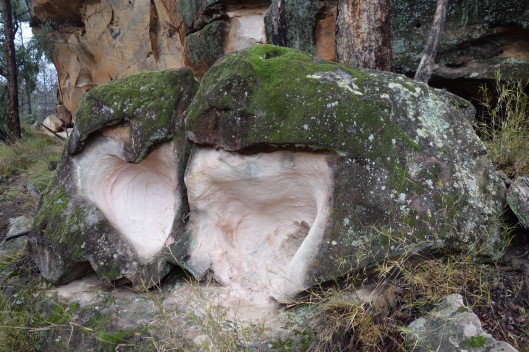 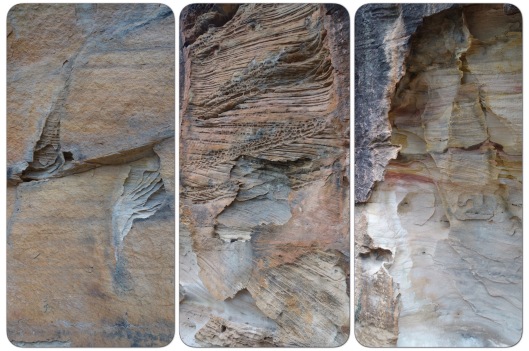 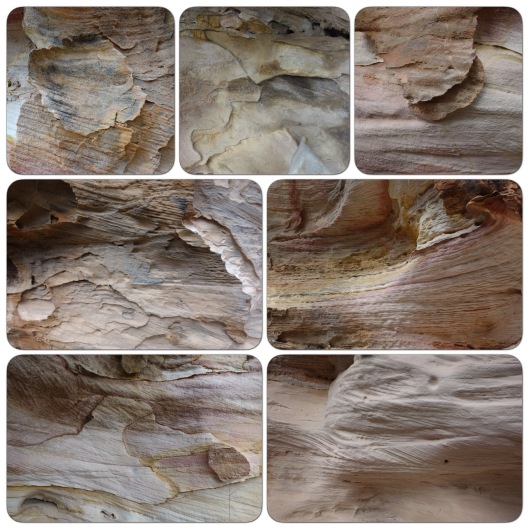 There are signs of the Ancestors, caged behind steel bars to protect them from vandals, who have already damaged a grinding rock by trying to mimic the action, and carted away a piece of rock with peckings. The horizontal gap in the cage is a doorway for bats. 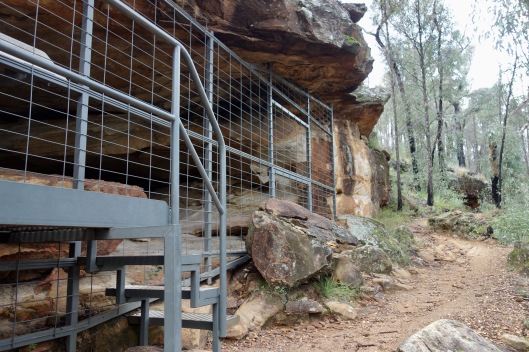 The white rock shows grinding grooves where Gamilaraay people shaped and sharpened stone axes and other tools against the sandstone. 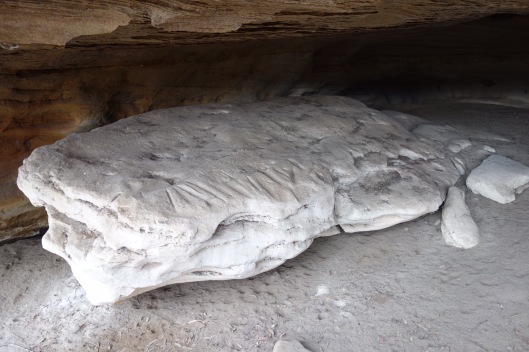 The second cage encloses pecked etchings of emu and kangaroo footprints that may be 12 000 years old, and more grinding grooves. 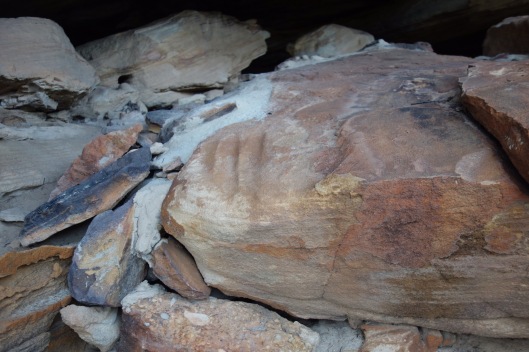 I sit for a moment on a convenient bench and look out over the Pilliga, as the Ancestors must have done for thousands of years without the intrusion of farmland … 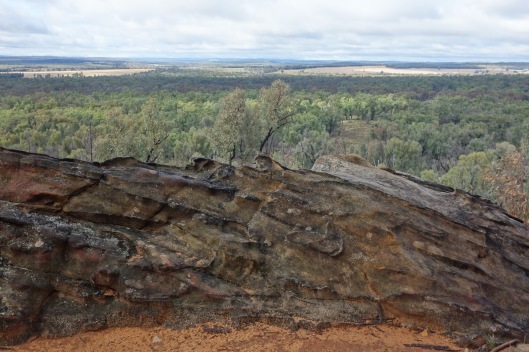 … and then return to intent perusal of unremitting beauty. 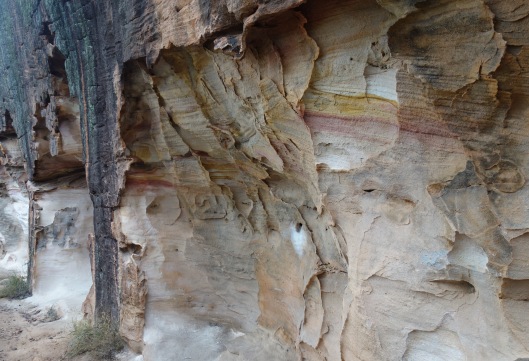 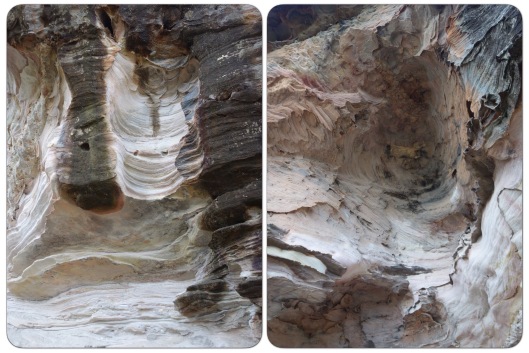 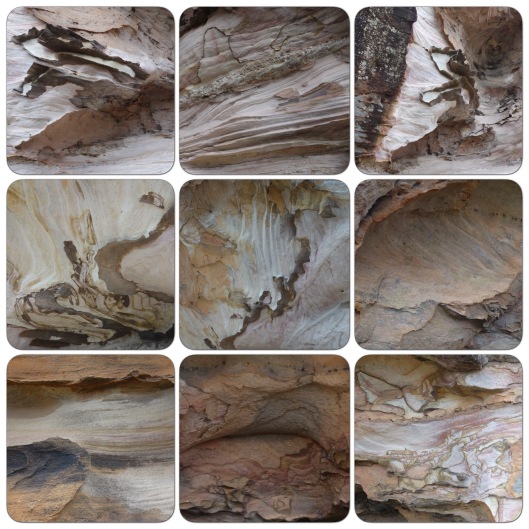