There are continuities. And there are differences. In Warsaw I frequent National Theatre Live screenings in a glitzy multiplex up five escalators, in a cinema with more than 200 seats, in the evening, after a ten minute tramride and a walk through the main station. In Narooma I go to the same screenings in the intimacy of a small cinema of thirty seats in the afternoon after driving for half an hour, parking nose to nose with a tree, and walking five paces to the side door.

I activate these comparisons continuity when I go to see Bernard Shaw’s “St Joan”, last seen in Sydney in my youth when I used to take my theatre loving aunts to Old Tote performances. After all, they were the ones who introduced me to the theatre: “The merchant of Venice” when I was eight, starring Robert Helpmann and Katherine Hepburn. As soon as I saw Gemma Arterton as Joan, I was reminded of Zoe Caldwell, the 1962 Sydney Joan, and my faded memory even produced her name.

The performance this time was filmed in the Donmar Theatre, that erstwhile banana storage warehouse in London. The setting suggested a boardroom with a background of sharemarket screens, a news reader and paintings of the medieval Joan. This worked for me, although not for many critics, making the entrenched positions of church, state and army overtly modern as Joan, dressed in a way that suggested the medieval, challenges their entrenchments with her passionate convictions of rightness and her role as one appointed by God. The dialogue is unexpectedly lively and amusing in the hands of a superb cast: I remember it as irritatingly dialectic and abstract.

One thing the performance revealed to me was a rather worrying conservatism and respect for authority, the same feeling I have with the conviction of Julian Assange. How can someone believe so absolutely that they are in the right? Especially with many “experts” saying otherwise?

And I’m left with a gnawing question: did Joan sheer her hair off with her sword onstage as featured in the trailer? If so, I didn’t see it. Where was I?

For other portrayers of Joan, read

My ritual of farewell to my Australian home included a final visit to Narooma Kinema to see 45 years. I was drawn to the movie by a review that used the word “understated”, and by the premise: the arrival of the past in the present when the body of Geoff’s girlfriend from fifty years ago is found perfectly preserved in ice in the Alps.

I was not disappointed. Over five days the impact of this discovery unfolds slowly as Geoff and Kate prepare to celebrate their 45th wedding anniversary. You can watch Kate’s mind turning over all the implications through fleeting expressions. It’s a beautifully nuanced portrayal of a long relationship: its easy intimacies, its daily life, its tendernesses and its occasional acerbities.

There were many moments I especially loved: Kate looking in the window of a shop at watches for an anniversary gift; Geoff, unwilling, being persuaded to go to a reunion; the incidental touches in passing; Geoff’s middle of the night search in the attic for a photo of Katya; dancing in the living room followed by an unsuccessful attempt at love-making; Kate looking at the slide showing Katya’s pregnancy.

Part of the understatement  was the lack of emoticon-soundtrack. Except for occasional music from the deep past and a brief interlude when Kate plays the piano (one of those pleasures that get lost in routine, like Geoff’s birdwatching), the only sounds are those that belong in the scene:  dog barking, wind blowing, chatter of the town street, Geoff thumping around in the attic. There is nothing to direct our response.

I was apprehensive about the way the movie might end. I really didn’t want it to wind up neatly, and it didn’t. After Geoff’s emotional tribute to the marriage, they raise their hands in joint triumph, but Kate breaks the holding and stands quiet and unsmiling.

This post contains images and a video of a snake which some (overly timid!) readers may wish to avoid

As I drink my morning coffee and J washes up, the diamond python begins his serpentine journey back to the guttering, and hence to his daytime home in my roof. This time, I’m involved in nothing more important than a coffee, so I whizz out with the camera to record his passage. It’s fine while he’s on the balustrade, and I get close enough to touch him (which I don’t do) as his tongue flickers in and out navigating his way back to the lattice. The sun shines on his gleaming black and gold pattern. At one point he senses my presence and stops, oscillating his head to figure out what’s invaded his journey. As he weaves his way back up the lattice the jealous sun positions itself behind the competition, ensuring that I can only photograph sunflare. 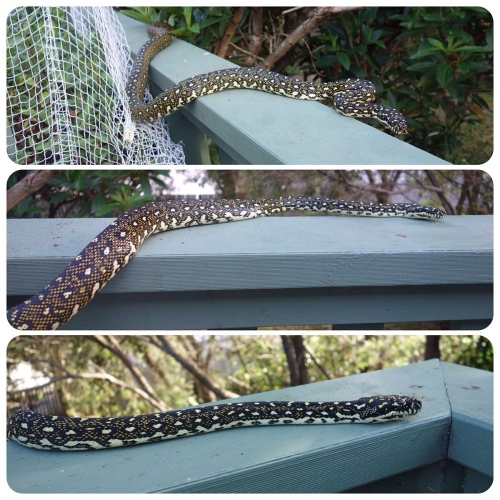