For Marie, with thanks for five glorious hours, and years of friendship

I sit in the sun with my friend Marie on her wide deck, looking down over neat paddocks to a line of trees and the creek, as she tells me about the creatures that share her world. A tawny frogmouth regularly perches on the deck railings. Barn owls live in the shed. One year a pair of cranes built a practice nest in a tall eucalypt: the next year they returned “for real” and she watched three chicks as they learnt how to stagger along a branch towards food brought by their parents. When a plover family began to behave strangely she took notice and the parents led her to a post hole where one of the chicks had fallen in. Her partner encountered two kookaburras fighting: when he picked them up he found the beak of one firmly embedded in the other one’s head. An old kangaroo who hangs around the house recently died: his body is down by the creek.

As we talk the horse snorts periodically.

I love visiting Marie. She always has travel stories: this time about her escape from a dictatorial tour guide on a package tour in Cambodia. She eyes off the drivers waiting to waylay tourists; finds one who isn’t aggressive; and books him for the next day to take her by tuk tuk out to the killing fields.

We talk and soak up the sun, and then head out for a walk, driving through the forests of Murramarang National Park, to Durras Beach, where the bush comes down the mountain to the sea. The tide is lowish but coming in, and a flat rock platform stretches out towards a little parcel of an island topped by green. This is sandstone country: we don’t have flat platforms like this further south. We follow a thin track edging the beach until we encounter a kangaroo who seems to be blind and sick. When its companion emerges from the bush we decide to leave the track to them and I bum it down to the sand.

Soon we’re caught up in all the visual delights of the platform: the shiny gleam of rocks; pools catching bits of the sky; rocks neatly packaged in iron-stone; unnaturally natural right angles; neat layers of rock laid down under the sea over who knows how many eons; pock marks, cracks and intrusions; tiny shells, a dead starfish, a wrenched up crinoid and piles of seaweed; swirls of brown and grey and orange and tan; and then the grand finale.

The view down the coast along a string of bulbous bluffs, striped and capped with trees: pleasures for another day when the tide is low. 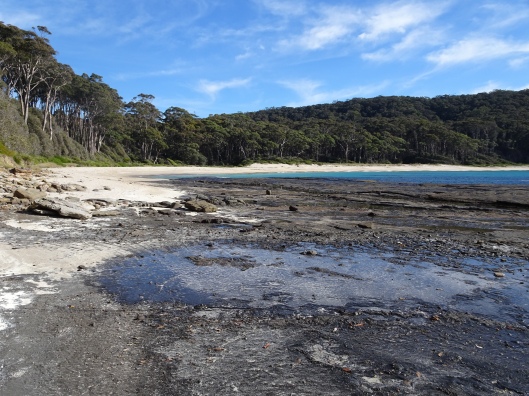 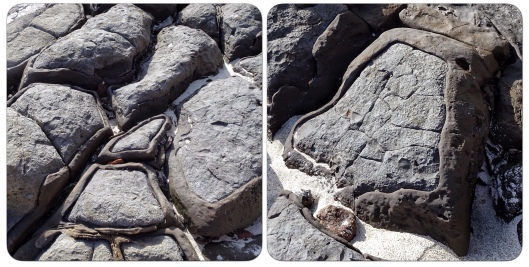